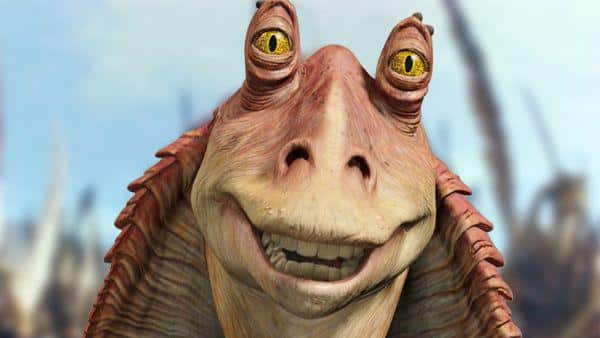 This video shows leaked alpha gameplay of Star Wars: Battlefront III, which was to have been the third video game in the Star Wars: Battlefront series. Although LucasArts never announced the game, Free Radical Design developed the game from 2006 until 2008. The video gives you an example of how vast the battles would have been: all the Republic’s Cruisers you see on the video are piloted by full crews of real players.

So one thing we learned from this footage is that Jar Jar would have been a playable hero. Would you play him? Would you play him just to run him into an untimely death? With all the hate on Jar Jar, it makes you wonder why they put him in the game. So I did some digging and it looks like this wasn’t necessarily THE JarJar. They just put the Gungan race in the Hunt mode.

Personally, I like it! I would have played as JarJar.

Speaking of what we would have played, it really is a shame we don’t get to see this game in action. Free Radical had a different way of designing games from DICE and sometimes different is better. It was a beautiful game and a lot of hard work and time went into creating it. It’s really too bad we never got to see it at completion. The graphics and gameplay could be a little rougher than what we see from DICE but they really dumped a lot of story into their games.

So what happened to the game anyway? We don’t really know for sure since a lot of it is just rumor but Free Radical co-founder, David Doak says it’s because LucasArts was out to destroy the project from the get-go. Doak made several unpleasant allegations in an interview with Eurogamer where he says LucasArts wanted unreasonable cuts and other demands.

“[W]e went from talking to people who were passionate about making games to talking to psychopaths who insisted on having an unpleasant lawyer in the room,” Doak said.

They also say the new management of LucasArts basically destroyed the Battlefront III project as well as the studio.

“LucasArts hadn’t paid us for six months,” Free Radical audio director Graeme Norgate said, “and were refusing to pass a milestone so we would limp along until the money finally ran out. They knew what they were doing, and six months of free work to pass on to Rebellion wasn’t to be sniffed at.”