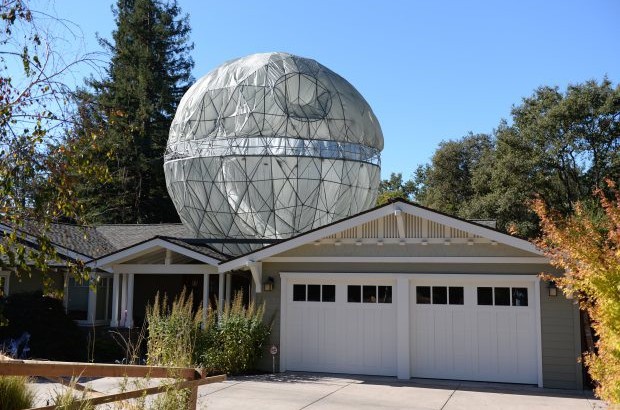 So we’re not sure how his neighbors felt about it but we think this father is pretty awesome. For Halloween 2015, and in preparation for the release of Star Wars: Episode VII, Colby Powell and his kids build a 23-foot death star and placed it on the roof of their house.

He says he plans to leave it up for sometime between Thanksgiving and Christmas and then he might store it or sell it on eBay. He said he is also considering sending it to Burning Man.

All construction on the death star began as a family project until it grew to a point too large for the kids to complete and he had to bring in some bigger guns. he reports that he also had people driving by who would stop and ask if they needed help and that about two dozen people contributed to the assembly without even knowing just what it was they were helping build.

All in all, it was over two stories tall, required a crane to be assembled and lifted onto the roof and it looks awesome, especially at night.

Here you can see a video that shows the structure and also tells you how he did it. It looks like the kids also had a blast with it! The video also shows it lit up at night and it’s really fantastic. We gotta say, this guy deserves a nomination for Day of the Year!