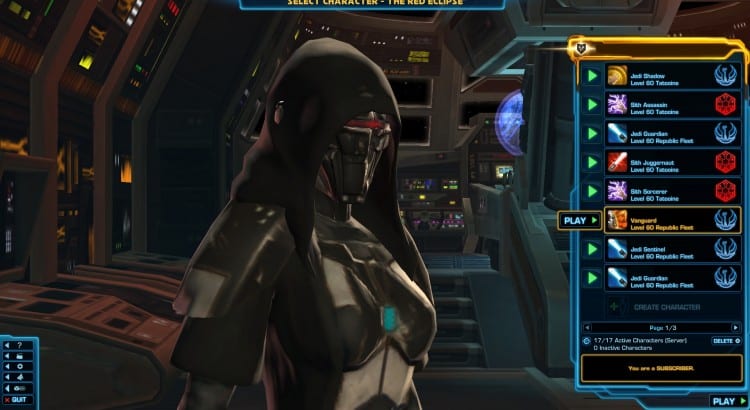 What if you had an emergency and you knew you would not be able to play your SWTOR account for an extended period of time but you’d already paid for your subscription? That is exactly what happened to one player and Bioware stepped up to offer a solution. A user who goes by the name Dragoon- on Reddit tells the story of how his father passed away in October and knowing he needed time to deal with his grief and also help his mother and family, he called Bioware to see what they could do for it. He shared his tip-of-the-hat story for all to see:

My dad died in the evening of the 20th Oct.. I played less than 2 hours KoftFE before I got the call. Since then I haven’t played Swtor anymore, mainly because I have to take care of my mom, do tons of paperwork and file it at the authorities. Which makes me usually fall asleep before 10pm.

Today was the first time since I got some spare, but I realized I won’t have more than a hour per day to play, if at all, the following weeks up to December. However I’m subbed until mid January. So I called support, see if they could suspend my account. Without asking any questions or difficulties they froze my account.
Told me to call support again when I’m ready to get back into the game. They will then reactivate my account and restore my passed game time to me. That is was kind and nice of Customer Support. Tip of the hat!

It’s true that Bioware does seem to stand out as a company that cares about its player base. This was another heart-warming story that proves that. As for putting a freeze on your SWTOR to save your time, it seems like this is a one-time deal or else it might get abused. So we don’t recommend trying it while you go to college classes, or when you’re at work during the week. However, if you have a personal or family emergency like Dragoon- did, why not contact them and see what they can do to help you out?