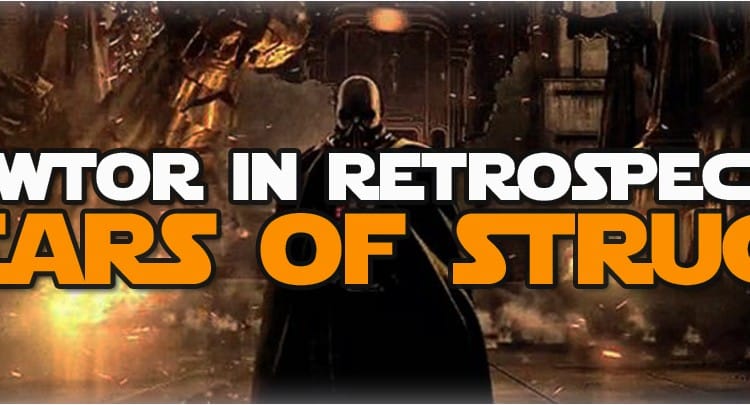 I remember that initial launch date of SWTOR very vividly. Here at the site, we had been preparing for December 20, 2011 for quite some time. I was also anticipating the birth of a child and at that point, we were wondering which would come first – my baby or SWTOR. Turns out SWTOR launched just two days before my little one was born and I was back home and ready to enjoy some gaming in between feedings along with everyone else who had been anxiously awaiting the big premiere. Any of you who were around four years ago in the beginning will remember that SWTOR had a rocky start. There were many problems at launch and quite a few issues that had to be resolved to get us to where we are now.

Here, our pal Vulkk has written an excellent two-part series of memories of SWTOR for the past four years. It’s really well worth the time to listen and read because he covers so much of what makes SWTOR truly great. No, it wasn’t a game launched without flaws. No, it hasn’t been perfect the whole journey. But there are so many wonderful things to celebrate about SWTOR and Vulkk has described it all perfectly here in this anniversary dedication.

You can find Part 1 here: The Ancient Times, Struggle, Love (2005-2011) where he talks about the years leading up to SWTOR, why he says SWTOR is the best MMO he’s ever played and more. He shares some old memories as well as talks about that big day on October 22, 2008 when the official website first launched and we all got word that the game was under development. There’s also a video if you care to listen:

And here in Part 2: Dark Times, Awakening, EndGame Struggles (2012-2015) he tells us about the game, his memories, facts and stories from his time in SWTOR since the launch. If you’ve been around for awhile, you’re probably going to feel the nostalgia as you read/listen to his reminiscing.

Here is the video for part 2.

We hope that you’ll head over and give Vulkk some love because not only is he an awesome guy, he’s been part of the SWTOR community since the very, very beginning and has some great perspective to share. What are some of your favorite memories of the past 4 years of SWTOR?