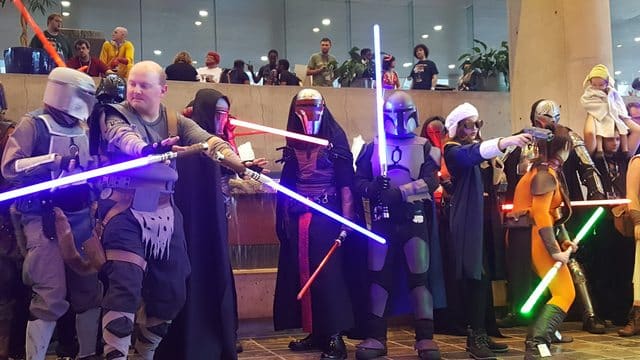 There are many exciting things happening at Oktakon, one of my favorite conventions. However, the cosplayers are definitely one of my favorite parts. It’s so much fun to see all the cosplayers around the convention and to see the very creative ways people find to enact their favorite characters. It’s really the best of the best, and a ton of fun. Last year had a lot of great cosplay photoshoots, but there was one in particular that really stood out to me. I knew I just HAD to be at that one and it did not disappoint.

One of my favorite parts of Otakon last year was the Star Wars photoshoot. The newest Star Wars movie had just released and people were seriously in the Star Wars spirit. There were people from near and far, young and old, dressed as their favorite characters from the Star Wars Universe and it was fantastic. Of course, there were Rey’s everyone, but I quite enjoyed it. There was no shortage of every other character, too. My absolute favorite was the adorable little Yoda who was stealing the stage during the photoshoot. You’ll see if you flip through the photos. Too cute for words!

Here is an album of some of my snaps from that cosplay photoshoot:

Are you going to be at Otakon this year? If you’re there (and especially if you’re cosplaying Star Wars), let us know so we can try to find you. If there are any Star Wars cosplayers this year, I’ll be sure to get as many snaps as possible. It’s all happening August 11th-13th.