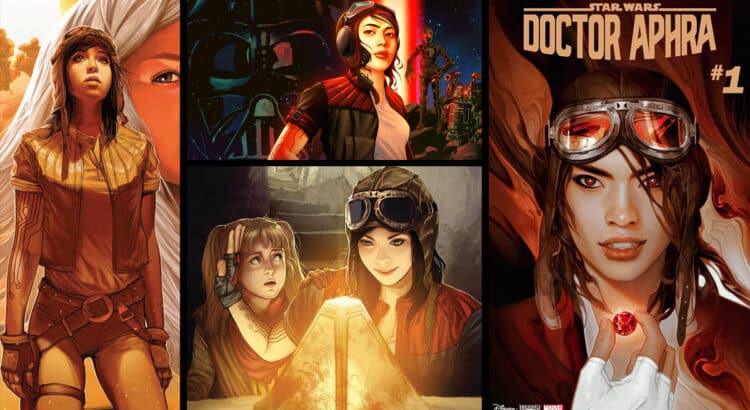 Dr. Aphra was released to the holo tables in Star Wars: Galaxy of heroes the other day. But who is this character?

Dr. Aphra is a character in the Star Wars franchise who first appeared in the Marvel Comics series “Darth Vader.” She is a rogue archaeologist and bounty hunter who is known for her cunning and resourcefulness.

Aphra was born on the planet Valthor and grew up in a family of archaeologists. She developed a love for history and ancient artifacts at a young age and spent much of her childhood exploring the ruins and tombs of the galaxy. When she was older, Aphra attended the University of Coruscant where she studied archaeology and earned her doctorate.

After graduation, Aphra began working for the Galactic Empire as an archaeologist and was soon assigned to work on a project for Darth Vader. She quickly proved herself to be a valuable asset to the Sith Lord, using her knowledge and expertise to uncover ancient artifacts and relics that were of interest to the Empire.

However, Aphra’s loyalty to the Empire was questionable at best, and she often used her position to further her own interests. She was known to sell artifacts on the black market and even worked with bounty hunters to capture valuable targets for profit. Despite her questionable morals, Aphra’s skills as an archaeologist and her ability to find valuable objects made her a valuable asset to both the Empire and to those who sought her services.

As time went on, Aphra became more and more disillusioned with the Empire and began to question her loyalty to them. She eventually decided to go rogue and began working as a freelance archaeologist and bounty hunter. Aphra’s reputation as a skilled and resourceful individual quickly spread throughout the galaxy, and she became known as one of the most formidable hunters in the galaxy.

Despite her reputation, Aphra’s life was often filled with danger and conflict. She frequently found herself in battles with other bounty hunters and smugglers, and she often had to use her wits and cunning to get out of difficult situations. Aphra was also targeted by the Empire for her betrayal, and she was constantly on the run from their agents.

Despite the dangers she faced, Aphra remained determined and resourceful, using her skills and knowledge to outsmart her enemies and complete her missions. She also developed a close relationship with a group of droids, including BT-1 and 0-0-0, who became her loyal companions and helped her on many of her missions.

In the end, Aphra’s actions often had consequences, and she often found herself in trouble with the law or facing dangerous enemies. However, she remained true to herself and did what she believed was right, even if it meant going against the Empire or risking her own life.

Dr. Aphra is a complex and interesting character who is known for her intelligence, resourcefulness, and determination. She is a skilled archaeologist and bounty hunter who is not afraid to take risks or go against the grain to achieve her goals. Despite her questionable morals, Aphra is a formidable force in the Star Wars universe, and her adventures continue to thrill and captivate fans of the franchise.