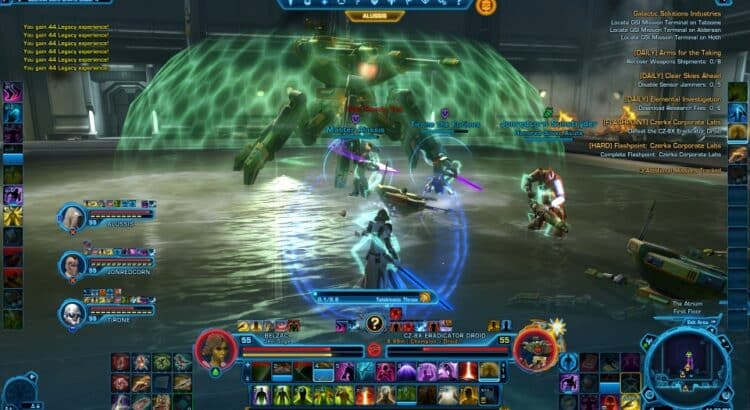 The Czerka Corporate Labs flashpoint in Star Wars: The Old Republic is a challenging and intense experience for players of all skill levels. This flashpoint, located on the planet of CZ-198, is a laboratory facility that has been taken over by rogue Czerka Corporation scientists who are conducting dangerous experiments on sentient beings.

The flashpoint is designed for a group of four players, and it consists of three boss encounters that players must defeat in order to complete the flashpoint. The first encounter is against a powerful droid named the CZ-1X Executioner. This droid is heavily armored and has a powerful energy shield that makes it difficult to take down. However, players can use the environmental hazards in the area to weaken the droid and make it more vulnerable to attack.

The second encounter is against a group of Czerka scientists who have been mutated by their own experiments. These scientists are highly aggressive and will attack players on sight. They also have the ability to summon additional enemies to fight alongside them, making this encounter particularly challenging. To defeat them, players will need to focus their attacks on one scientist at a time, taking them out one by one before moving on to the next.

The final encounter is against the flashpoint’s main boss, Dr. Lorrick. Dr. Lorrick is a powerful scientist who has been experimenting on himself and has gained superhuman abilities. He is extremely fast and agile, and can also summon hordes of enemies to fight alongside him. To defeat him, players will need to focus their attacks on him while also dealing with the enemies he summons.

In addition to the boss encounters, players will also need to navigate through various environmental hazards and puzzles in order to reach the final boss. These hazards include toxic gas clouds, laser grids, and security turrets that must be deactivated. Players will need to work together and communicate effectively in order to overcome these obstacles and reach the final boss.

Overall, the Czerka Corporate Labs flashpoint is a challenging and rewarding experience for players of all skill levels. It requires a combination of skill, strategy, and teamwork to defeat the bosses and navigate the environmental hazards. With the right strategies and a well-coordinated group, players can successfully complete this flashpoint and reap the rewards that await them.