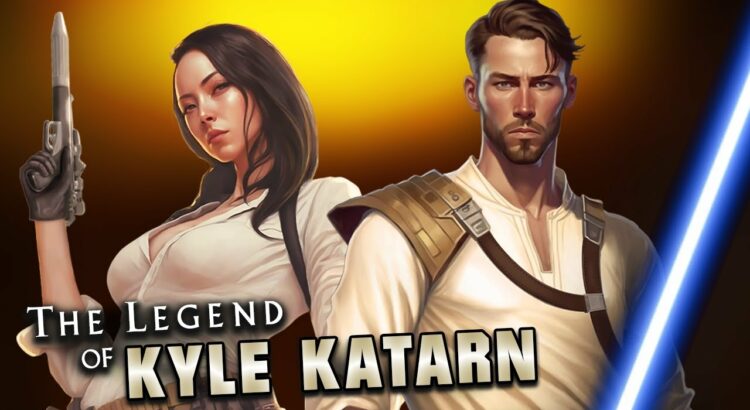 Kyle Katarn is a character from the Star Wars Legends universe, a soldier and self-taught Jedi Knight who has played a crucial role in the fight against the Empire and the rise of the New Republic. He is a complex and multifaceted character, with a story that spans across several video games, novels, and comics. In this article, we will take a deep dive into the Kyle Katarn iceberg, exploring his origin story, his journey to becoming a Jedi, and his many battles against the Empire and the dark side of the Force.

Kyle Katarn was born on the planet Sulon and grew up in the city of Sulon City. He was raised by his father, Morgan Katarn, who was a respected mechanic and engineer. Kyle’s father instilled in him a love of machinery and technology, and Kyle grew up to become a skilled engineer himself. However, his life took a dramatic turn when he was just a teenager, as the Empire invaded Sulon and killed his father. This event would shape the rest of Kyle’s life, as he vowed to fight against the Empire and bring them to justice for the death of his father.

After the death of his father, Kyle joined the Rebel Alliance and became a soldier in their fight against the Empire. He quickly proved to be a skilled and capable fighter, and was soon promoted to the rank of Lieutenant. He was assigned to a special unit known as the Rogue Squadron, where he served alongside other skilled pilots such as Wedge Antilles and Luke Skywalker. Kyle’s first major mission with the Rogue Squadron was to steal the plans for the Death Star, a powerful battle station that the Empire was building. This mission was a success, and Kyle played a crucial role in the eventual destruction of the Death Star by the Rebel Alliance.

After the destruction of the Death Star, Kyle continued to fight against the Empire, taking part in many battles and missions. He was present at the Battle of Hoth, where he was able to escape the planet and evade capture by the Empire. However, his luck would not hold out forever, and he was eventually captured and taken to the planet of Vjun, where he was interrogated and tortured by the Empire. He was able to escape, but not before learning of the existence of a powerful weapon known as the Valley of the Jedi.

The Valley of the Jedi was a place of great power, where the spirits of many Jedi who had been killed by the Empire were said to reside. Kyle became obsessed with finding the Valley of the Jedi, believing that it held the key to defeating the Empire once and for all. He eventually found the Valley, and was able to release the spirits of the Jedi that were trapped there. This experience awakened Kyle’s own Force abilities, and he began to train as a Jedi himself.

As Kyle’s Jedi training progressed, he found himself pulled in two different directions. On one hand, he wanted to use his new powers to fight against the Empire and bring them to justice. On the other hand, he felt a pull towards the dark side of the Force, which promised him greater power and control. Kyle struggled with this inner conflict, but ultimately chose to stay true to the light side of the Force.

With his Jedi training complete, Kyle returned to the battlefront and joined the New Republic in their fight against the Empire. He took part in many battles, including the Battle of Endor and the Battle of Coruscant. He was also instrumental in the capture of the Emperor Palpatine, and played a crucial role in the eventual defeat of the Empire.

After the Empire was defeated, Kyle faced a new challenge. The remnants of the Empire, led by a rogue admiral named Thrawn, were still active and