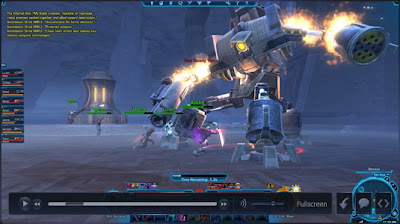 Today’s Friday update comes in the form of a developer walk throug of the Eternity Vault. Once again Dallas Dickinson is the host – this time of a high level Operation in Star Wars: The old Republic.

During this video Dallas Dickinson provides commentary on the encounters players will face in this large endgame Raid. Throughout the video we see multiple class abilities, from the Bounty Hunter firing rockets, to what seem to be combat rez.

A prison discovered buried in the ice on Belsavis is thought to house an ancient and deadly evil that could threaten the galaxy. To counter this threat, General Threnoldt dispatches Imperial forces to investigate the prison and confront the dangers within. Watch as a group of players work their way towards the prison gates in the opening section of the Eternity Vault, one of the high-level Operations in Star Wars™: The Old Republic™.