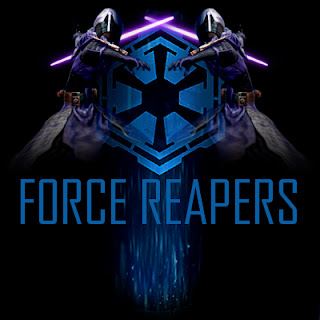 Today I have to pleasure introducing a real role playing guild with own guild story. Check out the interview with  The Force Reapers below:


Where did your guilds name come from?
I am a Mass Effect and BioWare fan. So took Reapers. Then the force. Force Reapers. Right simple but it became popular and suits us.

Can you give me a quick 2-3 sentence description of your guild?
Our guild is for role players. We have our own story. We have ranks. We want nice and loyal players. Each class has its role in our Guild. People who can Star Wars and want to take a role in the story. We support the Empire but we don’t like the Sith and they don’t like us that much.

How did your guild come about?
Me and some friends were longing for the game and wanted to role play and I love to fiddle around with websites so I made a site. Then we began to get members and it became larger and more organized..

What kind of play style do you focus on? PvE, PvP, RP:
Above all RP. But other than PvP. We do not know if we should be on an RP or PvP server yet. if there are, we will take a RPPvP server. Most of our members are role players.

How serious do you play and/or run the guild?
RP is something we want. Serious RP. But we have members who are not so much for RP. That we must respect, but even they must respect us who want to role play. On the website they do not have to be serious in the chat. But we have rules. If they disturb, intimidate members or have a negative attitude towards the guild they can get banned for some time or be kicked out. But we try to make it good for everyone.

Do you have ranks or a certain hierarchy in your guild?
We have ranks for each class. We want to have depth in our Guild. Each class has its own ranking ladder. They go up in rank by PvP kills. The highest ranks require Rep.

Rep is how good you are in the guild. How good Team player you are. And how good you work with the other players. You should be nice to the others in the guild. You have to help other players. Stuff like that gives you a great reputation. (Rep.) If you do not care about other players or you are stupid to someone in the guild, That will give you a bad reputation. Then you will not have access to certain ranks. But rumors, anyone can create them. Therefore, we have the Council. The rumors always go through them and they discuss and choose what will happen.

Why did you choose the Empire?
I personally love being evil in games. So choosing an Empire Guild. Then it’s easier to run an Empire Guild when it comes to RP. The Republic has more rules and laws. We do not have that. Our Guild goes mostly for respect and honor. It is simply better for the RP.

Why do you run a guild?
I have been in other guild when I played WoW. But people were bullies and sentenced people quickly. Do not get into anything like that again so I started his own. Then I can take care of the Guild and decide things. No bullies and everyone should be respected, etc..

How do you approach Raid Planning?
We have a Council Member (Warlord) who plan and have an eye on raids. We have an event page where all the raids and other things will happen uploaded. People can sign up and that show that they will participate. Then our Warlord will tell them just before so that everyone is there and so on.

Are you always open for new recruits or do you want to keep a certain guild size?
We are open to everyone, but we are careful who we let in. It fills a form then discuss the Council that. Viewing the person. Most importantly SWTOR name and so on. We have had problems with spies or troublemakers. So we must be absolutely sure who we let in. But we have no bar of how many people are allowed to join. More a question about who we let in.

Age Requirement?
We have set the age of 15 year age limit. But if one is mature and stick to the rules you get to be a member even if you are under 15. Age does not matter much when you are role playing.

Guild size?
We don’t have a huge guild but it grows. We went just past 50 members about a week ago. We are growing in the shadow of the empire.

How do you spend your time until release? Do you know each other in real life or do you spend a lot of time on forums?
Right now we are trying to be social and active at any time on the Guild site. Strengthen our friendships and get to know each other better before the game comes out. We have members from around the world.

What Other Games are you currently playing as a guild?
We play nothing special right now. Not as a guild anyway. Are those that play in private with each other. We focus more to become a better guild and get better friendships.

If somebody is interested now how and where can they apply for membership?
People can go to our site and fill out a form. Later we will discuss about the form. We check if you are suitable then we vote. http://theoldsith.enjin.com/recruitment

One last question, if there was one thing you could ask the Dev’s to include, what would it be?
Hmm tough question. Asked the Guild. We wish for a Guild ship or base. BioWare has said they like the idea but that it should not come at launch. We want more RP stuff really.