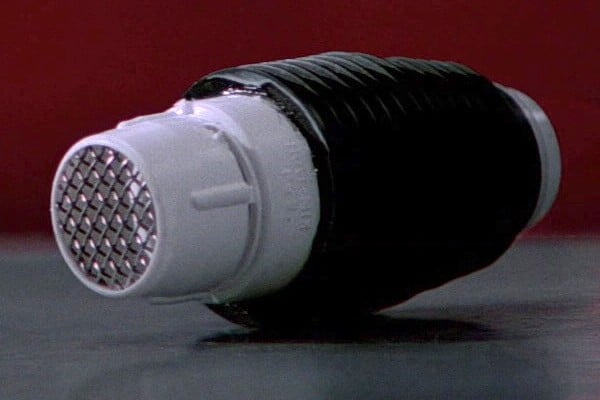 A comlink is a small, hand-held personal communications transceiver. It consists of a receiver, a transmitter, and a small power source. Comlinks vary in size and configuration from hand-held cylindrical models to flat wrist-mounted units, to units incorporated into armored helmets.
The comlink used by Jedi Master Qui-Gon Jinn has a port built into its base for transmitting data gathered by other devices, such as a sampler used to examine midi-chlorian levels. 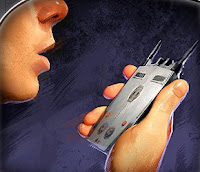 A typical comlink has a range of 50 kilometers, though this range can be extended by tapping into expanded satellite communication networks. Some comlinks come equipped with encryption routines to prevent the interception of sensitive transmissions.
In urban areas dense with electromagnetic activity, comlink range is greatly affected and usually supplemented by networks that help distribute the transmission to the intended recipient. Military and vehicle-mounted comlinks have greater range due to greater power sources.

Starships come equipped with comlinks for short range communication — such as requesting clearance while approaching a landing facility, or while executing squadron or wing maneuvers. Since comlinks are limited to speed-of-light transmission range, they are of limited use for interstellar applications.

For that reason, ships also carry a subspace radio, which provides much greater range but also requires a greater power allotment. A subspace radio typically has a real-time range of several light years. Sector governments often set up a network of subspace transceivers that help connect the scattered worlds, forming a sector-wide communications grid.

The most powerful and far-reaching communications medium is the HoloNet. A network of non-mass transcievers submerged into the time-bending dimension of hyperspace connects worlds in real-time across incredible distances. The HoloNet, maintained by the galactic government, is a horrendously expensive venture, and similarly the devices required to communicate on the HoloNet are costly to the average galactic citizen. In the time of the Empire, much of the public applications of the HoloNet were dismantled, making the galaxy-wide communications network a tool of the military and corporate interests.