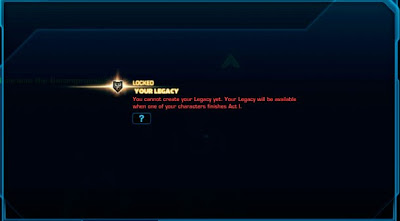 While we were all awaiting Patch 1.1, which was delayed, there is news that in the not-too-far future, there will be a huge update for SWTOR. The second release, planned for March, is expected to be much bigger in scope- “huge” in fact, in terms of what it will add to the game.

SWTOR Game director James Ohlen, who told CVG in a recent interview that Game Update 2 will include three major pieces of content, as well as “full” Legacy game content.

“Game Update 2 is much bigger in scope. It’s further out from launch, so we can have much more of the team focused on it. There’s Part 2 of Rise of the Rakghouls, a brand new planet called Denova which has an 8-16 man Operation and a new Warzone.

“We might also be able to get some new space game missions into it. In addition to that we have single player content that you’ll be able to go through as well…”

He goes on to explain more about the full Legacy update, something that many players are interested in, as well as to share thoughts and opinions on the launch and how it went back in December. He mentions guild banks, PvP ranks and other fun additions that fans have been asking about.

It would still seem then that BioWare is listening to the fans and trying to give them what they want as much as possible within the confines of what an MMO will allow and also while trying to keep the game fun and fair for everyone.

What do you think? Are you excited for what might be coming in March?

Read the full interview at CVG for all the details.