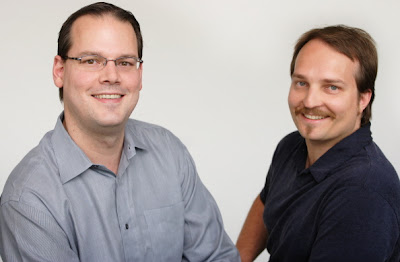 Penny Arcade’s Report column has an interesting interview with the BioWare founders. Drs. Greg Zeschuk and Ray Muzyka visited with Penny Arcade editor in a nice hotel suite in Las Vegas doing yet another interview for the press. These guys never seem to mind talking about what they do and sharing info and fun with the fans.
Ben Kuchera interviews the doctors and talks about TOR launch, ending a trilogy and what many people are asking- will there be a Mass Effect MMO:
“We’re the fastest-growing MMO in history, and it’s really a credit to our fans,” Muzyka said. “The launch was fantastic.” Taking on World of WarCraft was considered a near impossibility in the world of online games, but Bioware has the strength of the Star Wars brand alongside the company’s ability to tell wonderful stories. It’s a hard game to say no to, even for MMO beginners like myself. They also had the advantage of a late December launch, which was more good luck than planning.
They go on to talk about the launch of SWTOR and how some criticized the launch window and then how it went on to be very successful. But the fame and success of SWTOR is only one part of the story. They also talk about Mass Effect. With ME3 on the way, this is something fans are itching to know more about.
The interview goes on to say:
Does the game have any chance of sticking the landing? Will it offer a conclusion that satisfies the fans? “I just finished an end to end playthrough, for me the ending was the most satisfying of any game I’ve ever played… the decisions you make in this game are epic,” Dr. Muzyka promised. “The team has been planning for this for years, since the beginning of the Mass Effect franchise. Largely the same team, most of the same leads have worked on this for years and years. They’ve thought about [the ending] for years and years. It’s not something they’ve had to solve in a week or a month even, but over the course of five or ten years.” He used all the expected buzzwords to describe the ending: visceral, powerful, and rewarding. We’re also promised the feeling of wanting more and, of course, after the credits…
Kuchera also brings up the number one fan question of the current moment: will there be a Mass Effect MMO?
“Now that we’ve learned MMOs are really easy to make, and simple to run after the fact, we’re on it!” Dr. Zeschuk said, laughing. “The interesting thing, the implication of a Mass Effect MMO has so many expectations. We already bit off a big thing to chew with a Star Wars MMO, and that’s not so small,” he said.
Lots of interesting stuff in this interview so it’s worth the read, even if you’ve already heard the doctors in other interviews.
Read the full piece at Penny Arcade.
0
SHARES
ShareTweet