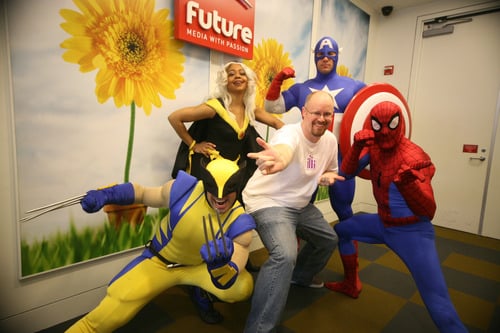 Yesterday we told you the story about David Bass getting a new job for WildStar at Carbine Studios. Now we can tell you that Stephen ‘Rockjaw’ Reid has also got a new job! Great news for the Community Manager let go from BioWare Austin. It was a sad day for me because I really liked Stephen. I have a signed poster framed on my wall from him. That’s not the kind of thing you get every day. He’s funny, he’s personable and his passion for video games emanates from his pores (nope, that’s not sweat!).

Stephen is blogging “while not really blogging” over on Tumblr these days and if you want to keep track fo what he’s up to, you can follow his posts.

His recent post explains a bit about what he’s been up to and where he is now working:

I’m back at Gazillion Entertainment, back working on Marvel games again, and I’m really happy about it. Just like when that photo was taken, I’m also strangely nervous about it – but I think if Spider-Man were by my side, he’d probably tell me “GREAT choice!” once more. But then, he’s biased.

Some of you may be wondering why I made this move, although if you read the above and you’re any kind of fanboy, I hope you get it. I did have other choices and could have gone elsewhere, but there are no guaranteed choices in this industry. The future of gaming isn’t certain and a ‘job for life’ doesn’t exist. All you can do is follow your passion and your heart and hope it leads somewhere great. That’s what I’ve done for my entire career, and I’m not going to stop now.

Ultimately working in the games industry is a rollercoaster ride, where you hope that the highs are better than the lows. I’ve hit those highs plenty of times. Now I’m back climbing the lift hill, and I couldn’t be happier about it.

And what is he working on in the future? One existing game and one soon-to-come game:

The already-launched game is Super Hero Squad Online, and it’s doing pretty well, thanks. If you have kids or feel you’re young at heart yourself, why not give it a go? It’s free, runs in your browser via Unity, and is a lot of fun – try the card game!

And the soon to come game:

If you see yourself as more of a ‘core gamer’, then you’ll probably be interested in our next project, which is Marvel Heroes. It’s a Diablo-style action MMOG that’s being overseen by the co-creator of Diablo, David Brevik, and lets you play as a Marvel character – from the big guns like Iron Man, Spider-Man and Wolverine, to lesser known heroes.

So there you have it folks! That’s what Stephen Reid is now up to.