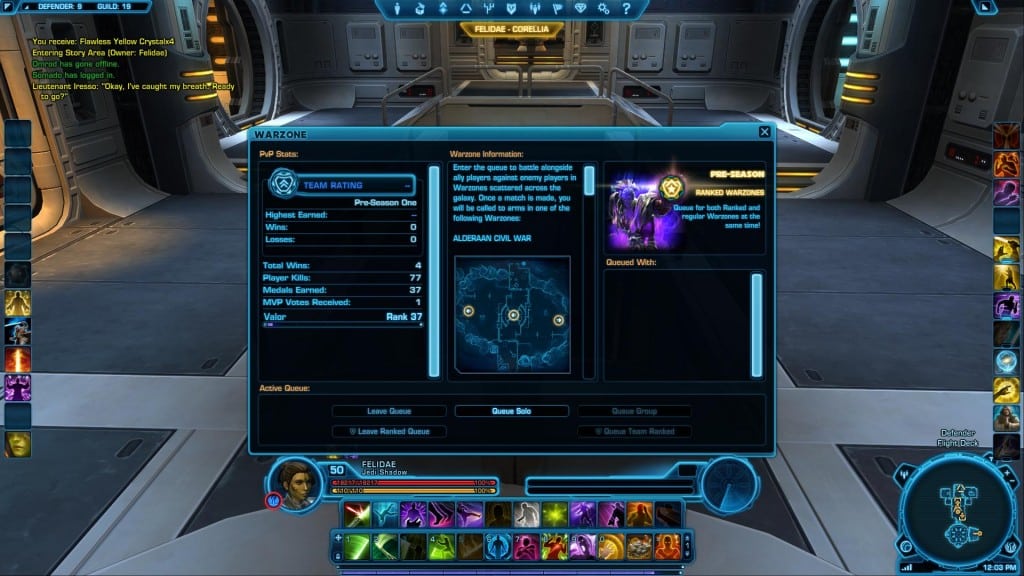 What are ranked warzones?

Ranked warzones are a new form of structured PVP ins SWTOR which offers 8-player teams the opportunity to face others in competitive, ranked matches. It’s a step up from regular, random PvP.

Ranked Warzones is the new way for players to take part in PvP play; it’s BioWare’s answer to the next step in competitive PvP. It gives teams a chance to compete against each other in ranked matches. If you want to take part in Ranked Warzone matches, you’ll need to put together a team that has at least 8 players. This rule may change later but as of now, you cannot compete in these matches if you don’t have the required number of players. So it’s time to start rounding up your best PvPers in the guild or at least, your best buddies that you know you work well with.

To begin, your team needs to play and complete 10 of the regular Warzone matches. Once you have met this requirement, each player will be individually rated according to their performance. Then, each of the players ratings are combined together to get a team rating that will be used to determine which teams make the best matches. Once this is determined, you’re ready to get started.

Ranked Warzones start out just like the regular ones. For example, as you enter the warzone you’ll see the map just like you do in the regular matches along with the different scenarios but then, get ready for some changes. Since you’re matched up with a team that rated close to the rating your team earned, the competition is going to be tough. You’ll have to really work for your win.

What’s in it for me?

Players who take part in these Ranked Warzones will reap many rewards starting with the rights to brag about being in these matches, especially when your rankings are high. In addition, once your team has earned high ratings, you’ll have the unique opportunity of taking part in an exclusive “Ranked War Hero set”.

If you’re searching for some incentive to take part in this type of PvP, this will certainly give you something to work towards. When you make it to this set, you’ll shift your “War Hero mods” and place them in the new set, which is blank to begin with. Once you do this, your gear will have a different color skin, which is a symbol of your accomplishments.

If you’re a competitive player, you’ll love taking part in these exciting new Ranked Warzone matches. This is about as competitive as you can get. Since you’re facing other organized teams that have similar rankings, you will have a challenge on your hands. In many cases, it’ll come down to who has the best strategies because you’ll constantly be playing against a worthy opponent.

Players who participate in Ranked Warzones will receive “Ranked Warzone Commendations”. This is an excellent reason to be a part of these PVP matches because these are used to buy War Hero gear, which means you can acquire a full set more quickly.

How to Get Started

The best way for a guild to get started is by having the PvP officer (if you have one) talk to the guild and find out who is interested in taking part in this exciting way to PvP. If there are 8 players ready for the challenge and you can all agree on a good time to play, you’re ready to get started.

As you’re playing in the regular Warzones, you can take advantage of this time to learn each other’s strengths and weaknesses and to learn how to work well together. This will help you become a stronger team as you take advantage of all the rewards Ranked Warzone matches have to offer.

Are you already doing ranked warzones? What do you think of it?