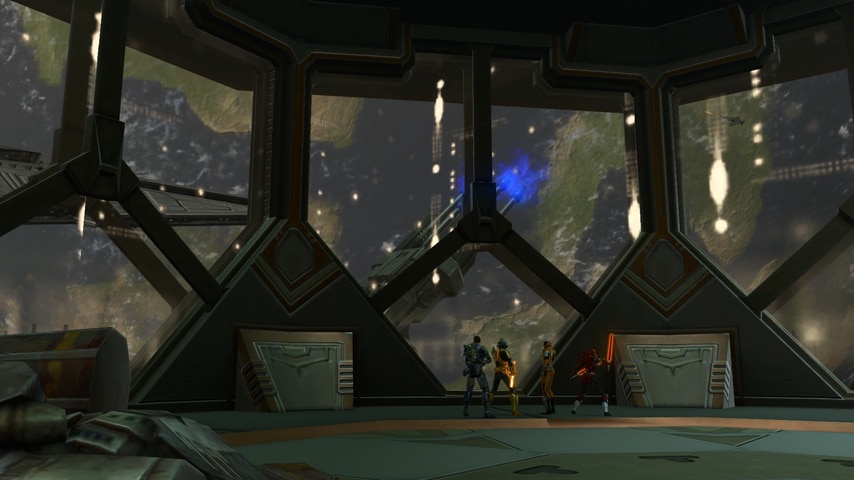 Senior Designer, on Star Wars: The old Republic, Jesse Sky posted a news article on Kuar Drive Yards, last night. The article describe the new flashpoint for level 15+ players that comes with game update 2.6. This will be a new type of instance that the team is calling a Tactical Flashpoint. The main thing that distinguishes Tactical Flashpoints is that they are role-neutral – in other words, they are balanced for a combination of any four classes. This means Group Finder will match the first four players it finds, which translates into drastically shorter queue times, especially for DPS classes.

I’m not sure how I feel about this yet, as I fear there will be no incentives for healing and tanking and you will only perpetuate the issue of a lack ofsupport roles in the long run. Time will tell though.

Check out the full article over at the official website or our snip below:

Starting at level 15, Kuat Drive Yards is accessible from Group Finder under the new Tactical Flashpoint category. In addition to being role-neutral, Kuat is bolstered and level-neutral, meaning players of widely-varying levels can band together to do it. So if you’re a high-level player looking for something to do with your lower-level friends, Kuat is an excellent choice. Be warned, however – companions will not be bolstered, so you should bring a full group if possible.

Kuat has an unusual structure – you will be assigned two out of five possible gameplay scenarios, and then you will be matched against one of three final bosses. You’ll also be matched against different enemies based on your faction – the Republic must reclaim the station from the Empire, and vice versa. Additionally, there are bonus objectives and mini-bosses which may vary between scenarios. The result is a Flashpoint that can change each time you play it, so you can return to Kuat while leveling for a fresh experience each time.

If you’ve played the Kuat Mesas map in Starfighter, you might have wondered about the larger story surrounding the conflict. By visiting the new Starfighter Launch Deck on the Fleet, you’ll have a chance to speak directly with Admiral Ranken or Admiral Bey’wan Aygo. You’ll also meet your Starfighter-exclusive crew members – (Aven Geth, Writch Hurley, Salan Rok, and MZ-12 for the Empire – Oro Wogawa, Kendra Novar, B-3G9, and Ashy for the Republic).

Finally, completing objectives in the Flashpoint will you earn you Reputation with Imperial Forward Command or the Republic First Fleet, along with achievements, titles, and other exclusive rewards, such as the KDY Shipwright armor and the highly-unusual KDY Orbital Lifter mount.