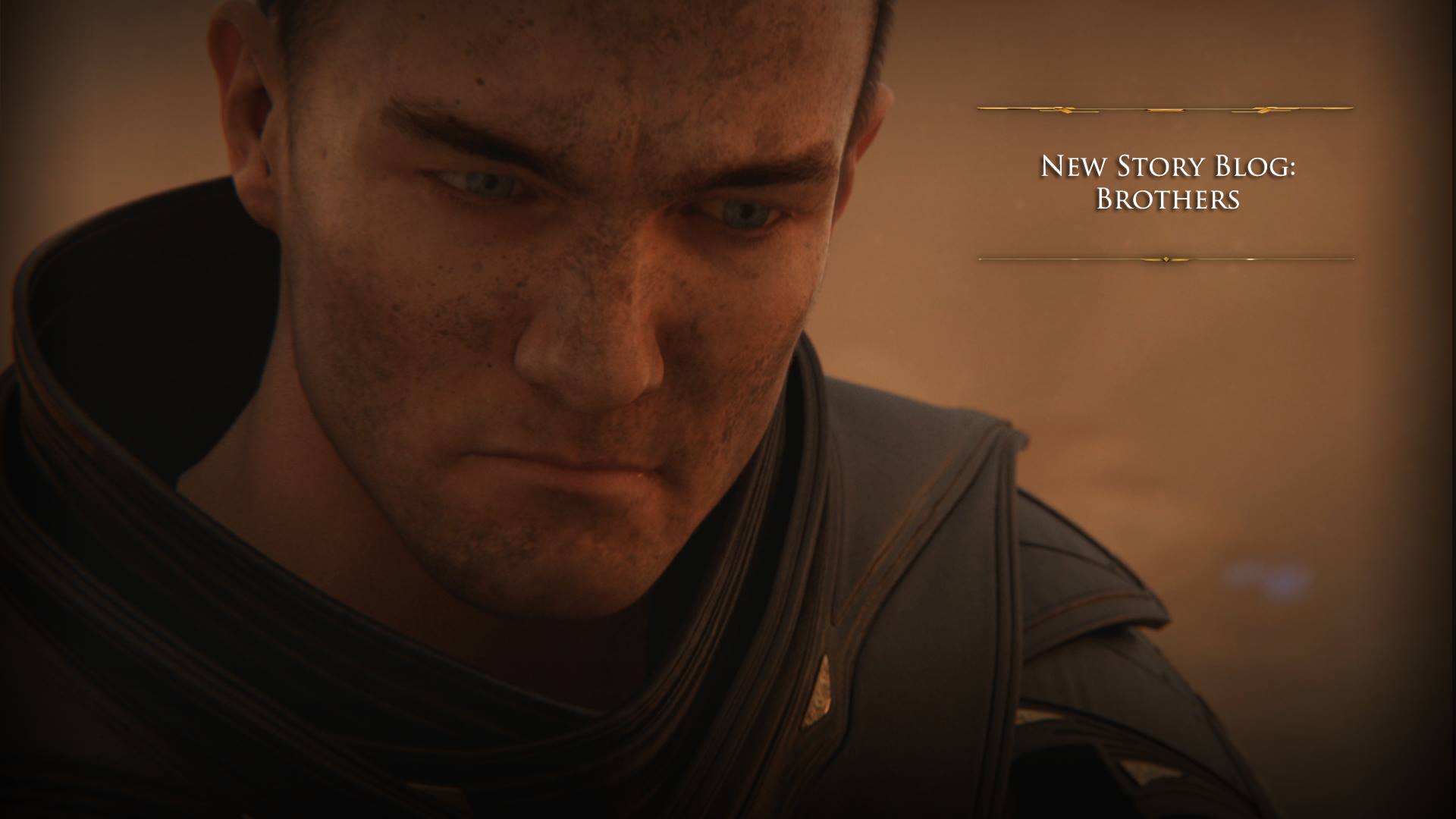 BioWare published a new story blog on the swtor website details Thexan and Arcann. These a the two guys from the Fallen Empire trailer. Check it out below:

Today, I watched my face burn. The skin cracked and curled as fire seared away the moisture. Charred flesh retreated from the heat and shriveled into a huddled black mass. One blue eye, identical to my own, held me in place–made me watch. In an instant, it was the face of a stranger. And we were no longer twins.

The memory tugged at my hand, pulled it to my cheek. I was startled by the smoothness that met the pads of my fingertips. My brother’s phantom grip still clutched my arm. I felt the bones beneath his skin reach out, try to escape the pain, and fail. Arcann had writhed for hours before sleep granted him mercy.

My own bed remained empty. The sheets were tight and immaculate against the mattress. Though not opulent, the bed seemed inappropriate. Its sleek, simple design was an insult to the war that raged outside. I grabbed the top sheet and rubbed it across my eyes, forehead, and mouth, staining it with sweat and sand. The soiled, white fabric brought bile to my throat. I crumpled it into a ball and threw it back onto the mattress.

My quarters–a glorified tent–provided a false sense of security. It drowned out the wind and the screams of our injured, but I knew the fighting continued. Darth Atroxa would not die easily. Her forces were loyal and ambitious, with a strong will to live. But she would fall. Arcann would see to that.

I heard the Knight’s steps before she knocked on my door.

“Your Highness.” She kneeled upon entering and waited to be spoken to. A tiresome dance enforced by Father.

Using the Force, I pulled a chair from the corner of the room and sat. “Tell me of my brother.”

“Prince Arcann is stable.” Her face was hidden beneath the traditional helm of a Zakuul Knight. Father changed our guards regularly to prevent attachment. The Knights of Zakuul were our servants, but his followers and subjects. He was their god, we only represented an extension of his will.

“He has not awoken.”

She hesitated. “No, my Prince.”

Her unease was vexing. “It wasn’t a question. I would feel if he was awake.”

“I–yes, Your Highness.” Her gaze locked to the floor.

It was easy to toy with the Knights. Their blind devotion to Father made them susceptible targets. As children, Arcann and I would switch clothes and play pranks on our guards. But I was too old for such games now. I could smell the grime beneath her armor. This Knight had fought with us today, and for that, she deserved my respect.
“Forgive me.” I sighed. “I’m tired. Will that be all?”

“The Immortal Emperor Valkorion, Slayer of Izax, requires an update.” The titles were spoken barely above a whisper. As if my father would strike her down for uttering them too boldly.

“I shall speak to him alone. Thank you.” I waved her away.

“As you wish, my Prince,” she answered and stepped back out of the tent.

I listened to her retreating footsteps, then activated my holocom. Father’s silhouette filled the tent. He stood tall with his hands behind his back. I kneeled.

“Our healers tried to save Arcann’s arm, but were unsuccessful. He was fitted with a cybernetic replacement in the field. As for the burns on his face–”

“A report on the planet, Thexan.”

“Your brother made his choice. I told him to stay on Zakuul. He paid the price for defiance.” His voice chilled the air.

“This campaign was his vision,” I pressed. “We were meant to topple the Core Worlds together. In your name.”

“His vision is narrow. Perhaps losing an eye will open his mind.” There was neither warmth nor malice in his tone. “Now, report.”

My muscles tightened. I was thankful Arcann was not awake. His patience with Father grew thinner with each interaction. I tried to explain that this was just his way–that Father only pushed us to be stronger, but it was becoming harder to placate Arcann’s anger.

I cleared my throat and obeyed. “Acceptable casualties, on our side. Darth Atroxa remains a threat, but I’m confident she will be neutralized. With her downfall, victory will be ours.”

“Do not underestimate the Sith,” Father warned, “Though quaint, they will do whatever it takes to survive. And, unlike the Jedi, they are not held back by lofty ideals or false morality.”

Without waiting for my response, he turned and cut the transmission.

I sighed. Fatigue was catching up to me. There would be another battle tomorrow.

My brother’s presence pulled at my attention. I hurried to the adjoining tent. Three droids and two healers stood over Arcann. I winced at the shrill sound of drilling. Arcann’s remaining fist clenched the sheets as they fitted him with a durasteel mask.

My brother stared at the ceiling. The mask covered more than half of his face and wrapped around the back of his skull. There was nothing human about its design–it was meant to intimidate as Arcann demanded. Scorched skin peeked from the edges, a testament to the ruined visage beneath.

“Leave us,” I ordered. The droids and healers bowed, then scurried away.

Alone, Arcann relaxed. His exposed left brow knotted in pain as he looked down at the cybernetic arm. My stomach churned, as we both assessed the day’s losses.
“A man can have anything, if he’s willing to sacrifice.” Father’s teachings were like poison on Arcann’s tongue. His modulated voice sounded foreign.

“You have sacrificed enough,” I assured him.

“No, Thexan.” His eye met mine. “This is only the first payment. There will be more.”

Time slowed and yet the world spun around us as I felt my brother slip away from me. On Zakuul, Arcann and I had conversations without words. We moved in tandem, flowed like water with one mind and purpose. But he was different now. I could feel the rage building inside of him. A rage I did not share.

I took his metallic hand. “How much are you willing to give?”

“Everything,” Arcann said without hesitation. “Will you not do the same?”

“I will fight for you, brother,” I pledged. “Your dreams are mine.”

Cold, metal fingers squeezed my arm and lit a flame of hope inside me. They say time heals all wounds.