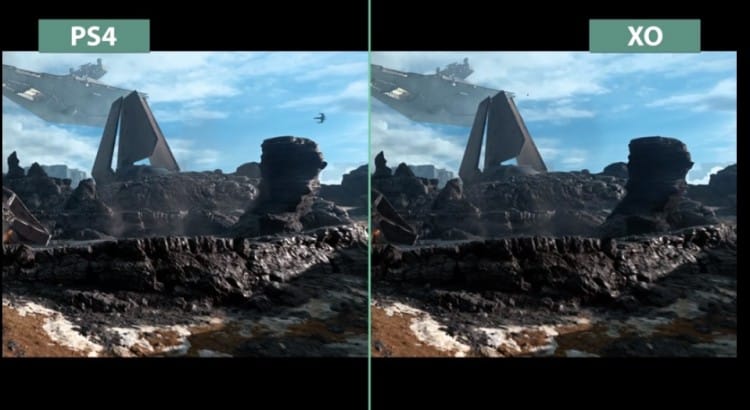 This past week, EA and DICE opened up the beta for Star Wars: Battlefront for PC, PS4, and Xbox One. The PS4 version of the beta runs at 900P and the Xbox One version runs at 720P. With this difference in resolution, it has caused conflict in the community.

Star Wars: Battlefront is using the Frostbite 3 engine for its visuals, and on Twitter Johan Anderson, the engine’s technical director, explained why DICE chose to use the lower resolutions on both of the consoles. He also answered a question about using adaptive resolutions and the use of the TAA option in the beta version.

Star Wars: Battlefront is looking great on all of the platforms and it seems to be very well optimized. However, the Xbox One version is experiencing more rough edges and a high level of shimmering on the fine distant details. According to Eurogater, “If you can look past Xbox One’s lower resolution, the actual content of the game is identical to PS4, and a decent match for PC’s high graphic settings. It means texture and shadow quality are the same on both consoles.”

The PS4 and Xbox One are both aiming for 60FPS and both of them stick to that number on the majority of occasions. EA could easily went for a higher resolution in favor of the game’s framerate, but this is not what DICE wanted, according to Andersson. Andersson stated that the team didn’t want to have to sacrifice the visual fidelity and framerate of the game, just for resolution. The technical director has also added that this choice is one that every development team has to make.

Andersson was also questioned about why DICE didn’t use an adaptive resolution in areas where the FPS is smaller than 60 FPS. He replied by stating that the team didn’t think of using this technique, but they didn’t implement it because of the fact that it makes it ultra-complex, which is already being combined with the temporal techniques that DICE is currently using.

Adaptive resolution is a technique that has been used in the recent Xbox One games like, The Witcher 3 and Advanced Warfare. The new and upcoming Halo 5: Guardians will also be using this technique that keeps a stable framerate. For Advanced Warfare, using this technique made it to have a more consistent framerate on the Xbox One, than the PS4 did. Overall, you can argue that this technique could have been viable for the Xbox One version of Star Wars: Battlefront as well, but all we can rely on is Anderson’s explanation.

Since we are already discussing resolution, the technical director mentioned also that the use of Battlefront’s temporal anti-aliasing option (TAA), but it has not been configured into the beta yet.

The TAA option in Star Wars: Battlefront would improve on the visuals for the PC even more. The technique that is only used by certain newer graphic cards and it uses many different techniques to make the edges even smoother. However, this option has not been completely implemented yet, so you can expect even smoother visuals once the final version is released.