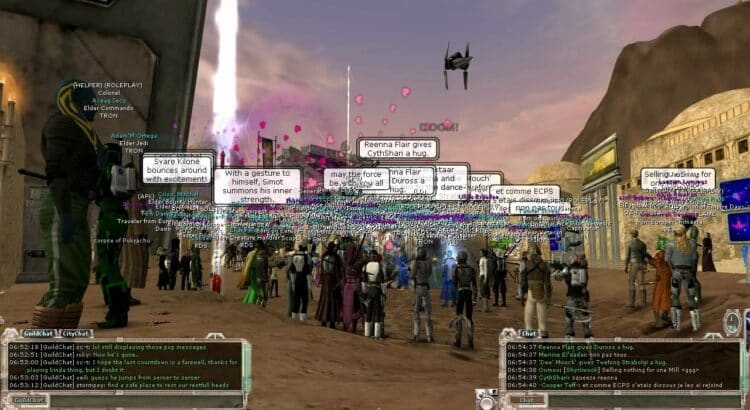 Star Wars Galaxies: An Empire Divided was a massively multiplayer online role-playing game (MMORPG) set in the Star Wars universe. Developed by Sony Online Entertainment and published by LucasArts, the game was released in 2003 and was actively played until its closure in 2011.

Set in the time period between the prequel trilogy and the original trilogy of the Star Wars films, An Empire Divided allowed players to create their own characters and explore the galaxy as members of various professions such as bounty hunters, smugglers, and Jedi Knights. The game featured a wide array of planets and locations from the Star Wars universe, including Tatooine, Hoth, and Coruscant, as well as original locations such as the city-planet of Coronet on Corellia.

An Empire Divided was notable for its extensive character customization options and its player-driven economy, which allowed players to craft and sell items to one another. The game also featured a wide range of activities for players to engage in, including space combat, creature taming, and player-versus-player (PvP) combat.

However, despite its popularity, An Empire Divided faced a number of challenges over the course of its eight-year run. In 2005, the game underwent a major overhaul with the release of the “New Game Enhancements” (NGE), which significantly changed the gameplay mechanics and sparked controversy among the player base. In 2011, LucasArts announced that it would be shutting down the game as part of a restructuring of its online gaming division.

The closure of An Empire Divided was met with disappointment and sadness by many of its dedicated players, who had formed a strong sense of community within the game. Despite attempts by some fans to keep the game alive through private servers, the official servers were shut down on December 15, 2011, marking the end of an era for one of the most iconic MMORPGs of the 2000s.

While the closure of An Empire Divided marked the end of an era for Star Wars fans, the legacy of the game lives on through its passionate player base and the memories of those who experienced its vast and immersive universe.