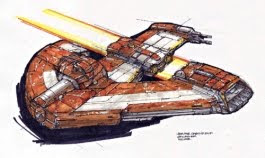 The trilogy’s Millennium Falcon. KOTOR’s Ebon Hawk. These weren’t just vehicles shuttling folks to and fro in the Star Wars universe — they were as much of a locale as any planet or base that our heroes visited. We got to know the inner workings of these freighters, and grew to love them for all their blocky, chunky, low-tech hominess.

I might have mentioned this before, but I sincerely hope that The Old Republic not only institutes player housing upon launch, but that the housing is a player’s ship. The more I played through KOTOR again, the more I love this concept, because it really does work on a MMO level:

See? When the ideas just kind of… flow like that, you know it’s a concept at least worth checking out. I want to have a “home” in TOR, and I really hope BioWare sees fit to give me one.