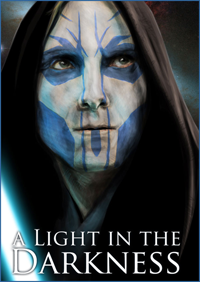 A Light in the Darkness is a Star Wars fan film made purely for the love of Star Wars and the experience of making a high quality low budget film. The full length feature will be release in late 2010.

Plot
A Light in the Darkness’ main action takes place approx. 1 year BBY on a small planet in the Outer Rim. A young boy watches the Jedi who saved his people be killed by the very clones who once fought by his side. Years later, as a member of a small insurgency against the empire he and his team hatch a new plan to take back their planet by drawing the attention of the newly formed rebel alliance.

Armed with the fallen Jedi’s light saber, he and his team battle to strike fear into the local imperial garrison, and overthrow their despotic governor. Their silent attacks give birth to a legend, and the people speak of a phantom Jedi whose spirit has returned.

As the story spreads they manage to draw attention to their forgotten corner of the galaxy, but who will arrive first, the rebel alliance or the empire?

Creators
hen Celebration V announced it was coming to their hometown of Orlando, FL, creators PJ Tamayo and Fed Wetherbee saw this as their catalyst. A Star Wars fan film was the perfect project to put their talents to work as well as challenge them to go beyond their comfort zone.

PJ Tamayo and Fed Wetherbee met several years ago in an MMA class. After punching and kicking each other for several weeks they started talking and discovered they had similar careers and aspirations. They had been looking for a project to work on together and began working on A Light in the Darkness in early 2010. Meeting the deadline of the Atom.com Fan Movie Challenge was daunting, but they were able to finish principle photography and editing in time to release a trailer.

Finalists
A Light in the Darkness’ trailer is now a finalist in the 2010 Fan Movie Challenge on Atom.com. All finalists will be screened at Celebration V on August 12th. Awards for various categories will be given on that night.