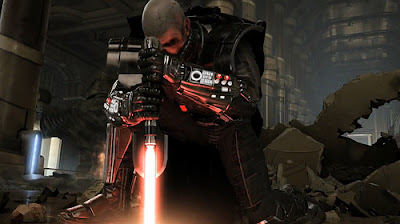 Speaking at the UBS Annual Media and Communications Conference in New York, EA CFO Eric Brown confirmed that SWTOR will use the monthly subscription business model. He also predicted a ten-year lifespan for the game:

“Our assumptions for break-even and profitability are not seven-digit subscribers. We think we can run and operate a very successful and profitable MMO at different levels… The key thing here is to really perfect the product. We’re shooting for an extremely high quality game experience. We view this as a ten-year opportunity.”

With such a highly anticipated title on their hands, it is very surprising to hear EA more or less undercut their projections. Obviously not wanting to fail under the feet of the World of Warcraft juggernaut, the publisher thought it better to keep their sales projections reasonable and instead hope the game does all the talking for them. Apparently no one told them that the space battles alone have gamers salivating.

Star Wars: The Old Republic will sell — this much is true. The real question is, how much of a long-term investment is BioWare willing to make? Are they going to be following Blizzard’s suit by constantly updating and regularly providing new content to the game, or do they plan to ostensibly wipe their hands clean after release?

Bioware has a number of top tier titles under their belt, and given that history many gamers will expect a regular delivery of content for The Old Republic. No doubt players will be pretty disappointed if that doesn’t happen. No matter how BioWare chooses to approach the lifespan of The Old Republic, they should feel confident knowing that they have a large fan base willing to devote 10 years or more to the game.