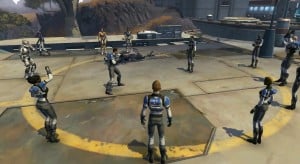 This video is original ment as a guild recruitment promo, for the guild Alpha Company and is basically pure win. The video is well edited and it is an achievement in itself that they managed to get 30 people to actually get in straight lines.

I read somewhere that they also act as like a rapid response team.

One time the imperials were overrunning one of the republic bases on alderaan, and someone whispered to people in fleet that they needed help. Alpha Company responded and had the entire crew show up as one and drive the imperials back, then set up and form a perimeter to guard the base. Very cool 🙂

Anyways, Check out the video below: