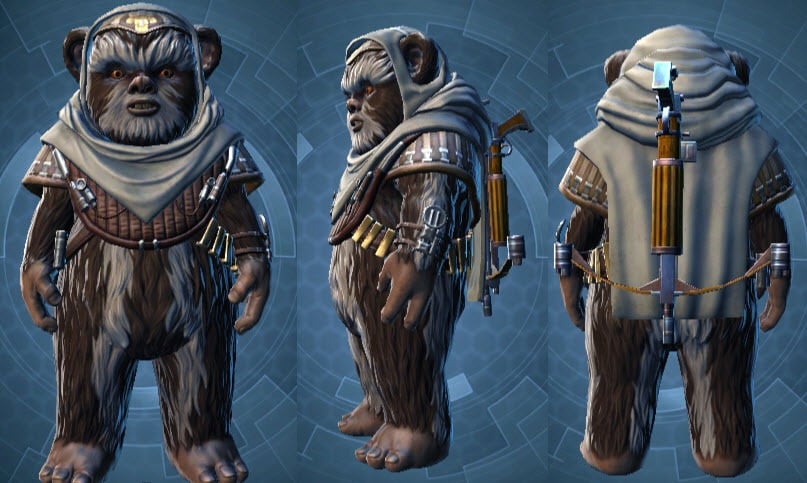 Recently BioWare revealed to us that Treek, the new Ewok companion from Game Update 2.3, will be coming to the Cartel Market in August. But as the word spread, it sounds like some players are not as thrilled with the news as BioWare may have thought.

Just Push Start tells us about how some SWTOR players are not happy with BioWare’s decision to put the Ewok on the Cartel Market:

When the Ewok companion was originally revealed on the Public Test Server, many found out that one of the ways to get the new companion is by having the legacy level of 40 and be able to pay one million credits. A lot of people were pleased to that decision as it gave players motivation to play and level their legacy level up to get the cute companion. However, when the news broke out that Treek will be making its way to the Cartel Market, a lot were not pleased as it bypasses the requirement, making everyone think BioWare is ruining the game by allowing Cartel Coins to take advantage of other players who have spent time in the game.

If you spend time looking it up on the forums, you can find many subscribers who share their opinions about the news. Here are a few:

I honestly have come to the conclusion that the people who make these decisions are perhaps the stupidest people I’ve ever had the displeasure of encountering in a customer service relationship. – uaintjak

This is ridiculous. I honestly am surprised, I thought BW would have atleast kept the legacy requirement on the companion so that way you have something to work towards.

Not everyone has to be able to have everything in the game and this promotes the fact that you should indeed be able to buy anything and bypass requirements. I have been waiting since February of ’12 for something awesome to come out for legacy level 50 and so far we get absolutely nothing. – NilethStar

Cartel market is a plague. Sometimes I think that they should just have pull the plug last summer. I’ll never buy another EA product. They are worse than Activision and that is something. –Kesphin

So what do you think? Is it a big deal that they offer the Ewok as a Cartel purchase? Some people feel that this means they are buying their way through the legacy requirement. Is this an example of what the future holds for SWTOR?

Some players are not happy with the fact that the pay-to-win route seems to be taking hold in SWTOR as well as other MMOs today. Others say it’s no big deal and they appreciate players being given the opportunity to choose how they want to gain items in the game, like companions.

Weigh in with comments and let us know what you think.