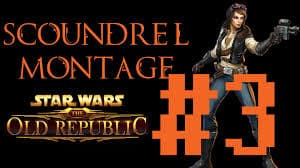 This is Kalamitis third installment of Scoundrel PvP Montage. Scoundrel PvP is extremely fun and I’m surprised that people are overlooking and don’t pick it up. I asked him why he use back blast way too early after shoot first, and he answered:

Good catch! When I’m playing PvE, I use exactly that rotation. While I’m 1v1 during warzones, most of the other classes outsustain me, either because of tankiness (for example a Juggernaut) or because of them having a lot of CC and healing (Sorcerer). That means, I have to burst them down during my stun lock and before they have the chance to fight me back. When I reopen the fight after I have used dissapearing act, I want to finish my opponent, I use Shoot First followed by Back Blast, for a quick 6-9k damage. Also, on PvP it’s not easy to get behind them (they don’t stay still 😛 ) to use Back Blast on an appropriate rotation. That’s why, I wait for the dot to tick at least 3 times before I refresh it.

Remeber to check out his channel were he also  have a video guide about Scoundrel Scrapper PvP rotation, openers and burst damage, but check out this PVP showoff below: