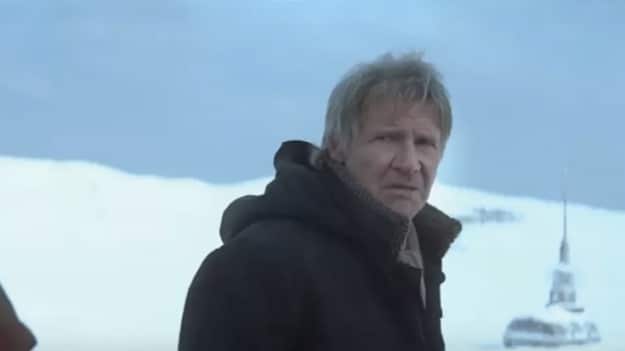 Disney has now released what will likely be the first of many TV spots. While we were told that there would be no more official trailers, who can say how many TV spots there will be between now and the big reveal day? While we still know very little about the plot, the latest TV spot and other marketing tells us a bit more. We can see that this will be a bit of a “passing of the torch” kind of story, at least in part.

On the light side, we have Rey (Daisy Ridley) and Finn (John Boyega) taking over for Leia (Carrie Fisher) and Han Solo (Harrison Ford), and over on the dark side, we see Kylo Ren (Adam Driver) promising to finish what Darth Vader started. There’s lots of questions about where Luke is but our guess is this is not going to be revealed until much later (or even in the movie itself) so you’re going to have to hold on for that one. However, there are some fun theories going around about this very topic as fans await the big day.

Disney is notorious for showing off via ads when it comes to their films. Star Wars, on the other hand, is historically close-mouthed until the big reveal. It will be interesting to see what else is shown between now and the big day of release.

See it for yourself here if you have not already:

There you have it!