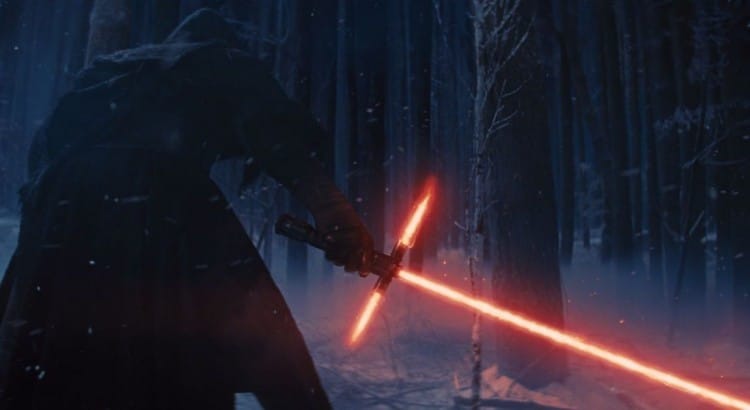 If you’ve seen the new film already (and if you haven’t, how are you avoiding the spoilers?!) then you may have even picked up on this already, especially if you were a big KOTOR player/fan. Some are saying there is a possible link between Kylo Ren’s lightsaber in Star Wars: The Force Awakens and the old beloved Star Wars video game, Knights of the Old Republic. If this link is true, it could bring things around in terms of Star Wars film canon.

Eurogamer.net takes a look at this theory:

There’s a believable link between Kylo Ren’s crossguard Lightsaber and, specifically, Knights of the Old Republic 2, although KOTOR1 and Star Wars: The Old Republic have to be included because of their shared timeline and, particularly, main character Revan.

The link regards the origins of Kylo Ren’s Lightsaber, and a revelatory paragraph in a “Visual Dictionary” book accompanying the film. ““Kylo Ren’s Lightsaber is an unusual design, dating back thousands of years to the Great Scourge of Malachor,” the book revealed, then said a bit more about the weapon’s design – although it’s really only the first sentence you need concern yourself with.

Nevertheless, here’s the extra stuff: “The crossguard blades, or quillons, are tributaries of the primary central blade, all spawning from a cracked kyber crystal that is the cause of their ragged, unstable appearance. An array of focusing crystal activators split the plasma stream into perpendicular blade energy channels, creating the quillons. The emitter shrouds on the crossguard protect the bearer’s hand from the smaller blades.”

The Lightsaber’s design dates back thousands of years to the Great Scourge of Malachor. What is the Great Scourge of Malachor? No one knows for sure because that’s the first we’ve heard of it. But rifling through Star Wars history there’s only one event I believe it can be: Revan using the Mass Shadow Generator above the planet Malachor 5. There is nothing else in Malachor’s known history that comes close.

The go into much more detail about this in the piece of you want to head over and read the full thing (we suggest you do) and they also explain why it even matters if the films are sticking to canon. Your average movie buff probably won’t understand the importance of this but most serious Star Wars fans definitely will. George Lucas created a world that for more than 35 years now has inspired imagination and creativity. We continue to see (and post here on our site) the creative ideas that Star Wars fans come up with regularly. It’s a beautiful thing to see really and it shows how Star Wars is so much more than just a popular franchise. It’s a deep part of life for many people.

So is this a real link to canon or just a nod to a famous and popular Star Wars game?