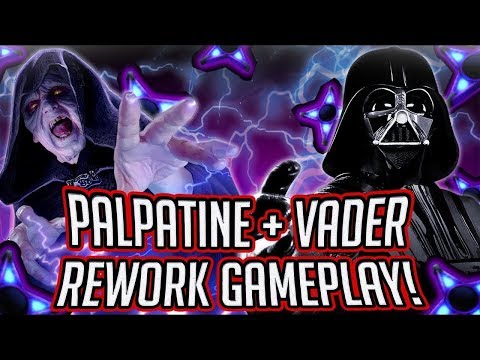 The Star Wars: Galaxy Of Heroes are making some changes to Vader and Paplatine. Below are the news:

Special 1: The Power of the Dark Side

FINAL TEXT: Deal Special damage to all enemies with a 70% chance to Stun them for 1 turn. Shocked enemies are Stunned for 2 turns and have their Shock dispelled. All allies gain Offense Up for 2 turns. (Cooldown 4)

Leader: Emperor of the Galactic Empire

FINAL TEXT: (ZETA) While Palpatine is active, at the start of each enemy turn, they take damage equal to 20% of their Max Health for each of the following: they are Shocked; they are a Jedi; they are a Rebel. This damage can’t defeat enemies. Palpatine has +50% Max Protection, and, when he inflicts Shock, he gains 5% Max Protection until the end of the encounter.

FINAL TEXT: Deal Physical damage to target enemy with an 80% chance to inflict Ability Block for 1 turn. Jedi and Rebel targets cannot Evade or Resist the effects of this attack.

FINAL TEXT: Deal Physical damage to all enemies and inflict Speed Down and 3 Damage Over Time effects for 2 turns. This attack can’t be Countered. (Cooldown 5)

FINAL TEXT: (ZETA) At the start of each encounter Darth Vader gains 8 Speed until the end of that encounter for each of the following: Empire ally, Sith ally, Jedi enemy, Rebel enemy. Darth Vader is immune to Turn Meter Reduction and recovers 5% Health when a Damage Over Time effect on an enemy expires.