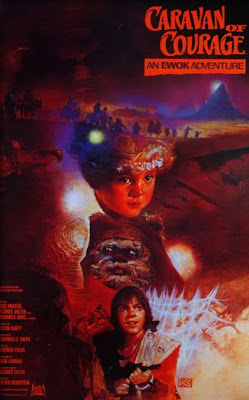 Caravan of Courage: An Ewok Adventure is a 1984 made-for-TV film set in the Star Wars galaxy. The film focuses on the struggles of the Towani family, who have been stranded on the forest moon of Endor after crashing their starcruiser. Specifically, it deals with the quest of Mace and Cindel Towani—who are brother and sister—in locating their parents, who have been kidnapped by a monster known as the Gorax.

The film is set sometime between the fifth and sixth episodes of the Star Wars saga. It is the first of two spin-off films of Star Wars Episode VI: Return of the Jedi. The film’s success led to a sequel, Ewoks: The Battle for Endor, and a spin-off animated series which also focuses on the Ewoks.

The film debuted with the title The Ewok Adventure as a holiday television special, airing on ABC on November 25, 1984. For its TV debut, some radio stations broadcast a simultaneous audio track in order to create a stereo experience for viewers. In the same year, the film was given a theatrical release in many countries with the title Caravan of Courage: An Ewok Adventure.

Development
The original impetus for Caravan of Courage was an idea George Lucas had for a “one-hour television special dealing with the Ewoks.” This “one hour” eventually was expanded into one and a half hours, however. Lucas had ventured into TV six years earlier, with The Star Wars Holiday Special. The special, though economically successful for the most part, had proved to be a disaster and embarrassment to Lucas. So, in Caravan of Courage, Lucas assumed full control over the content and production of the film, to ensure a film of good quality. One such event during production which exemplifies this need for creative control was around the time when the film neared completion. The production crew had prepared a script and shot a TV advertisement for the upcoming release. The ad featured Mace, Cindel, and Wicket walking into a diner, which was set in the 1950s, where they ordered milkshakes. Mace turns to the camera, and says something to the effect of “Don’t forget to tune in to The Ewok Adventure, on November 25.” When Lucas was shown the commercial for his personal approval, he disliked the idea of having his characters appearing on Earth in the ’50s and prevented the commercial from airing.

Caravan of Courage and its sequel would be more fantasy and magic-oriented that their big-screen counterparts that came before.

During the production of Caravan of Courage, the children of the cast had to balance their school work with acting in the film. During their time on the set, Eric Walker (Mace) and Warwick Davis (Wicket), were given a camera from Lucasfilm as an educational experience. Eric and Warwick, calling themselves W&W Productions, came up with the idea for a documentary of the making of the film, which they shot all on their own. The two boys then learned to edit film and cut together the final documentary using Lucasfilm equipment. This was the only known documentary made about the film, but was never publicly released. It exists now as private “home movie” for the two.

Plot summary
The Towani family’s starcruiser has crashed on the forest moon of Endor, leaving the group stranded. The children—Mace and Cindel—have disappeared, and the parents—Jeremitt and Catarine—cannot locate them. Jeremitt and Catarine desperately search with flashlights and call out Mace and Cindel’s names. However, in the midst of their search, the parents encounter the Gorax…

The children are found by the Ewok Deej Warrick. After Mace tries to kill them, the Ewoks subdue him and take both children to the Ewoks’ home. There, Cindel and Wicket Warrick become friends. Shortly thereafter, the Ewoks kill a beast only to find a life-monitor from one of the Towani parents with the creature.

They seek out the Ewok Logray who informs them that the parents have been taken by the monstrous Gorax, who resides in a deserted, dangerous area. A caravan of Ewoks is formed to help the children find their parents. They meet up with a wistie named Izrina and a boisterous Ewok named Chukha-Trok as well as the Ewok wizard Kaink before finally reaching the lair of the Gorax. They engage the Gorax in battle, freeing Jeremitt and Catarine, but Chukha is killed. The Gorax is thought destroyed when he is knocked into a chasm, but it takes a final blow from Mace (using Chukha’s axe) to kill the creature, who tries to climb back up after them. Thus reunited, the Towanis decide to stay with the Ewoks until they can repair the starcruiser, and Izrina leaves to go back to her family.

Sequels
ABC initially expressed interest in having the film be a pilot for a TV series, depending on the film’s success. However, Lucas wasn’t interested.

A sequel—with a working title of “Ewoks II”—was filmed in the summer of 1985, and released that November 25 on ABC as Ewoks: The Battle for Endor. The sequel picks up not long after the first film, and focuses on Cindel and the Ewoks’ battle against a group of Marauders— who have attacked the Ewok village, killed Cindel’s parents and brother, and captured many Ewoks.

In a 1985 interview with Starlog magazine, Warwick Davis speculated that a third Ewok film was in the works, but such a project was never produced.