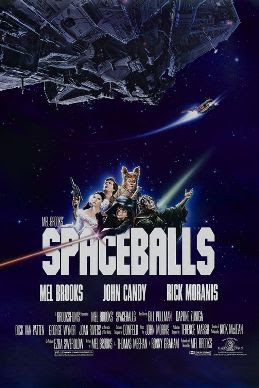 Spaceballs is a 1987 American science fiction parody film co-written, directed by, and starring Mel Brooks. It was released on June 24, 1987, and earned only modest returns, but has gone on to become a seminal cult classic on video and probably Mel Brooks’ most popular film. Its plot and characters contain numerous parodies of elements primarily from the original Star Wars trilogy, as well as Star Trek and other popular science fiction films, like Alien.

The film received mixed reviews from critics. Rotten Tomatoes reported that 62% of critics gave positive reviews based on 20 reviews with an average rating of 6.2/10. At another review aggregator, Metacritic, which assigns a normalized rating out of 100 top reviews from mainstream critics, the film received an average score of 46%, based on 14 reviews. Many critics agreed that, while it was funny, doing a Star Wars parody ten years after the original film had been released seemed slightly pointless. Roger Ebert of the Chicago Sun Times gave the film 2.5 stars out of 4 remarked “I enjoyed a lot of the movie, but I kept thinking I was at a revival. (Spaceballs) should have been made several years ago, before our appetite for Star Wars satires had been completely exhausted.””

In spite of this, Spaceballs is one of Brooks’s most popular films, and maintains a strong cult following. On the Rotten Tomatoes Community site, users gave the film an 80% approval rating based on 1,117 reviews

Breaking the fourth wall, the possibility of a sequel was already included in the film itself, with Yogurt’s quote: “God willing, we’ll all meet again in Spaceballs 2: The Search for More Money,” a play on the film title Star Trek III: The Search for Spock. In September 2004, news about a sequel, parodying the Star Wars prequel trilogy, appeared on the internet. It was rumored that there was going to be a sequel entitled Spaceballs 3: The Search for Spaceballs 2, but the sequel turned out to be a hoax.

In January 2005, it was revealed that Spaceballs would be turned into an animated television show. On September 21, 2006, Mel Brooks announced that he was developing an animated TV series based on Spaceballs, which debuted in September 2008. The series, Spaceballs: The Animated Series, premiered on the Canadian Super Channel and the American cable channel G4.