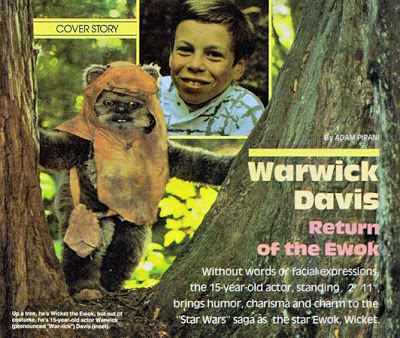 Young Warwick Davis decides he wants to be in pictures, so he gets himself an agent. The agent gives him an Ewok outfit and points him towards Elstree Studios. There Warwick wanders from set to set looking to find the other Ewoks.

Return of the Ewok is a 24-minute mockumentary starring Warwick Davis, the actor who played the Ewok, Wicket W. Warrick in Star Wars Episode VI: Return of the Jedi and the Ewok spin-off films. Davis and David Tomblin, Return of the Jedi’s first assistant director, created it, with Tomblin directing. Lucasfilm planned to use the movie as a promotional film for Return of the Jedi, but post-production on the film was never completed. 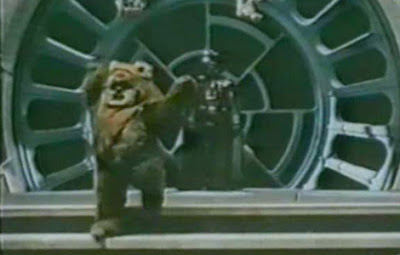 Versions
For many years, the only confirmed copy of Return of the Ewok lay in Warwick Davis’ own home entertainment center. This copy has been said by Davis to have been frequently shown to only close family, friends, and colleagues. Despite viewings of the film by those close to him, he had never shown the film publicly, and many fans had never even heard of it until 1996, when Davis mentioned it in an interview for the Star Wars Insider magazine. Davis publicly screened the film at the first Star Wars Celebration in 1999, and was also screened at Celebration II in 2002, and at Celebration III in 2005.

The original 16 mm print was said to be lost; according to Davis, his VHS copy is the only one in existence. However, a copy of the print, or even the original print, may actually reside in the Lucasfilm archives. Evidence of this was shown on the 2004 DVD release of the Star Wars Original Trilogy. A clip from the film of Wicket being chased by Boba Fett on the Death Star was included as part of the Easter egg of bloopers from the trilogy. It appeared in a widescreen format in good quality, suggesting that it had been preserved.

In April 2005, approximately four minutes of the film was made available on the official Star Wars website for members of Hyperspace, the official fan club, to download and view after the film was shown at Celebration III. Davis said at the convention that he loaned his VHS tape to Lucasfilm, who made a digital copy of it, and since it was the best known copy, that it was the source for the Hyperspace clip. The copy online at StarWars.com shows minimal amount of cleanup, and the soundtrack has been altered in several places. Where the original film used Supertramp’s “Take The Long Way Home,” the online version substitutes incidental music to avoid copyright clearance issues. Dialogue has also been changed – in one example, Wicket’s cry of “Crikey, it’s Lord Vader!” near the end of the film has been excised.

Unlike its counterpart mockumentary, R2-D2: Beneath the Dome, Return of the Ewok has not yet been officially released on DVD or any other format. Davis has reportedly stated that a future release is “possible.” 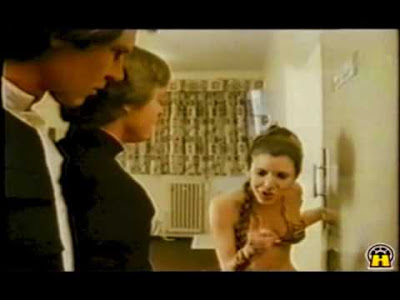 Bootlegs
In 2004, a recording of the entire film was put on eBay by someone who attended a screening, but the auction was pulled because the copy was reportedly given to the seller under strict agreement that it was not to be copied or sold. At least two people are alleged to have filmed it at Celebration II, but their copies have yet to surface. Although the film was also screened in the Pop Culture room at 2005’s Celebration III, no illicit recordings have yet surfaced.

The best known quality bootleg of the entire movie is a fan preservation project created in May 2005, a collaboration between Garrett Gilchrist of California and SKot Kirkwood [sic] of Texas. Their DVD version combines footage taken from the clip on StarWars.com, combined with a camcorder recording of the movie from one of its public showings, as well as clips culled from other sources, such as a brief excerpt shown on VH1. Gilchrist digitally cleaned up portions of the video and audio, then combined and edited the footage from different sources together to reconstruct the film. At 25 minutes, this version is slightly longer than the original, with Gilchrist adding his own opening and ending credits.

The first UK screening of this movie was at Empire Day 3 in Watford, England in 1996. A later showing was at the National Space Centre in Leicester for the Star Wars day convention on November 12 2005. It was presented by Warwick Davis and also included a question-and-answer session afterward.