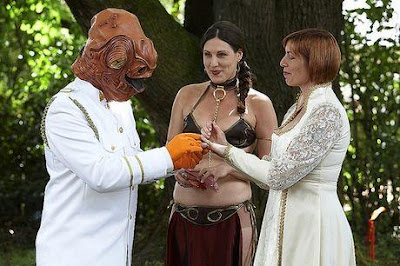 Daniel Erickson has posted a rather lengthy comment about Marriage in Star Wars: The Old republic. Basically he confirms it’s possible to be married in SWTOR, which is kind of a dilemma as the Jedi order has sticked rules about this.

“Easy to give the official answer. But first let’s make sure we’re all on the same page. Cultures change over time. They move one way then another, values shift, influxes of new peoples or discoveries change what is considered normal, etc. So if we’re strictly talking about TOR then arguments based on things that happened thousands of years earlier or later aren’t really applicable except to compare and contrast. Our views on modern marriage are not those of ancient Rome, and I doubt in 3,000 years they will be the same. So let’s talk about where Jedi and Sith during the time period of The Old Republic.

For the last two hundred years the Jedi Order has been getting steadily more conservative. The liberalization that was necessary to restock the Jedi’s numbers in the century after the events of Knights of the Old Republic II is now looked back on as a necessary evil. In the time that followed there were a number of terrible Dark Jedi who emerged as warlords and worse.

The two factors that showed up the most often in analysis of what caused Jedi to fall were unorthodox training methods and romantic entanglements. Thus in the following centuries training became more orthodox, with a return to the Jedi Order’s earlier traditions. Which Masters were allowed to train padawans (and which could train more than one at once) became more restrictive and romance became one of the most guarded against emotional weakness. As the game opens it is possible to get married as a Jedi but it requires a lengthy process of approval including from the Jedi Council itself. A couple must prove beyond a shadow of a doubt they are both able to handle the strain romantic couples can endure. All children of Jedi are taken from them and raised by the Jedi as a whole, the same as other Force users in the Republic.

For the last thousand years the Sith Empire has needed stability and growth more than anything else. That means alliances that prevent power struggles. It means encouraging the creation of more children. Which in turn means marriage and a focus on family.

Where once the individual was judged largely alone, bloodlines are now incredibly socially important. A Sith from a long line of powerful Sith will find his path through the Academy easier, his opportunities increased. A family with no Force-users who suddenly find themselves with a Force-sensitive child will sacrifice everything they have to get them martial training and mental discipline coaches – for if that child passes the Academy and becomes Sith the entire family will rocket to the penultimate social class in Imperial society, side by side with moffs and governors, second only to Sith themselves.

Marriage among the Sith is usually between only two people and is often to forge a political alliance. Marriages of love do happen often among the lower ranked Sith but decrease the closer the Lord is to the top of the pyramid-shaped power structure. Marriages between Sith and non-Sith are rare as the Sith believe it dilutes the chance of a Force-sensitive offspring. It is a common, though unspoken of practice, for Sith parents to kill a non Force-sensitive offspring and deny it ever existed, claiming the baby was stillborn, etc. A Sith with openly non Force-sensitive offspring is believed to be admitting the thinness of the blood in his or her family line.

Adultery is common among the Sith but officially illegal. Divorce is strongly frowned upon but killing one’s spouse for adultery or any other provable offense is socially acceptable. The one time you see obligatory divorce is when a member of the Dark Council breaks a couple apart to stop the assimilation of too much power in one place. Hope that helps!”