It’s been asked before, back when we were discussing the SWTOR UI and now it’s been officially stated by BioWare, there will be no addons for SWTOR at launch.

Georg Zoeller popped into the forums to clear up confusion on the matter, stating:

So there you have it, the official word on addons at launch.

So as a gamer, this brings up some interesting questions for me. I wonder what features that could be potential addons will make it into the initial launch of the game. 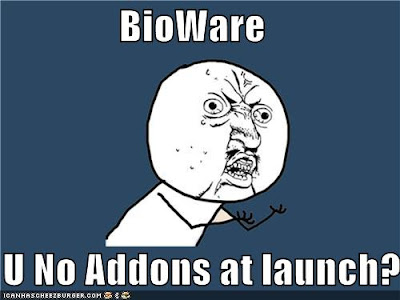 As a long time WoW player (since beta), I saw many addons eventually become implemented into the UI itself. Scrolling combat text was an early one and quest tracking was a huge one. In the early days we had Thottbot and in later days we had questing guides and Allakhazam. But when Blizzard implemented in-game quest tracking, there was no longer a need for many of the tips and tools we used, addons included.

I still like my Spartan UI and SexyMap and then you have your class specific addons like HealBot or Decursive but over the years, Blizzard has reduced the need for addons nearly completely. They can enhance the game or help you to personalize to your game playing style but there is no longer a need for them in order to enjoy the game.

So this brings up an interesting point; maybe BioWare is trying to create a game from the ground up that will not need addons. Later, they may allow them for the personalization of the game but if they give us all the features we need and want from the start, it greatly reduces the desire for addons in the first place.
This is good news for many players who find addons and mods cumbersome and a pain to update on patch days.