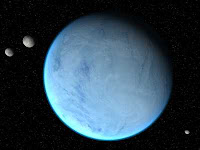 Hoth was the sixth planet of the remote Hoth system. A desolate world covered with ice and snow, located in the Anoat sector, a rarely-traveled portion of the Outer Rim Territories, it became famous as the one-time location of the Alliance to Restore the Republic’s Echo Base during the Galactic Civil War. It was discovered in 3 ABY by the Empire, causing the Battle of Hoth, a major engagement that destroyed the Rebels’ base and gave them heavy casualties.

Hoth’s existence was known throughout the galaxy as early as 4,000 BBY. The swamp wampas of Dromund Kaas were proven by scientists to be descended from the wampas of Hoth. It is possible that wampas were brought to Dromund Kaas during the Great Galactic War though the truth remains a mystery. Indeed the Republic suffered a major defeat at the hands of the Empire during that conflict. The two fleets included some of the most advanced warships available, and the Republic lost several valuable prototype vessels in the engagement. The battle showered the planet’s surface with hundreds of shipwrecks, but neither side possessed the resources to recover them. By the time of the Cold War, pirates began efforts to salvage the wreckage, but their efforts were contested with the onset of competing efforts by the Republic and Empire.

Read all about Hoth Here and check out the datacron locations below
Don’t forget to check out constantly growing list of guides for Star Wars: The old republic
63 – [Cunning +4 ]X:3144, Y::475 The entrance to the Star of Coruscant is in the southeast corner of the Starship Graveyard area at (2882, 448). First, when you get off the elevator to the second floor, go to your left. You will see the first moving crate going from left to right in the room. Climb up the crates on the left side of the room. Work your way towards the small wall to your right. Then jump over to a ledge on that wall. Walk around this ledge, and then jump down onto another large crate. Now wait for the first moving crate to arrive. When it does hop onto it, and ride it across the room. On the other side hop onto the large crates, and climb to the highest one. Then wait for the next moving crate to arrive, and hop onto it. Ride it half way across the room until it meets up with the crate that moves up and down in front of the Datacron. Hop onto it when it is even with the crate you are riding. Wait for it to rise up to the Datacron’s level, and hop off onto the Datacron’s ledge.

64 – [Endurance+4] X:2837, Y:´-376 First, go to (2610, -848) in the Jedi Encampment Heroic Area and start climbing the ice. Work your way towards the arch you went through when you entered the area. Go over the top of the arch and jump down onto the ice ledge below you. From there work your way towards the edge of the huge crashed ship. Run along the ledge on the ship you’ll have to jump down at the end to an ice ledge below you. Follow it around to another starship ledge. Follow that ledge, until it ends with ice. Follow the ice ledge around and up to the next level of the starship. At the end of the path you find the Datatcron.

65 – [Presence +4] X:1039, Y:´1242 Glacia Fissure – NE corner, go through the cave that dismounts you, hang a left up the hill, and hug the east wall. You can jump up on the ice sticking out of the wall, just follow it north and jump down onto the elevated area that you couldn’t reach before. Run into the cave to the north.

66 – [Red Matrix Shard] X:-738, Y:1708 First, you will have to buy an item called “Hydro-Thinner” from the Aurek Base Cantina Vendor at (-3533, -1382). Go to the Datacron’s location a little bit left of the Highmount Bluff’s entrance and use the Hydro-Thinner on it. It’s covered in ice and there is a large rock spike next to it to help with visibility.

67 – [Strength +4] X:-4015, Y:24 First, go to the area of (-4015, 24) in the western area of Clabburn Tundra, and search for the Ancient Probe (lvl 47 Champion) that is located in this area. Ancient Prob has a Prototype (Blue) quality item called “Depleted Datacron”. Once you have this take it to the north entrance of the Star of Coruscant at (2991, -94), in the Starship Graveyard. There you need to use the Coupled Recharge Station to charge the Datacron, which will allow use of it.