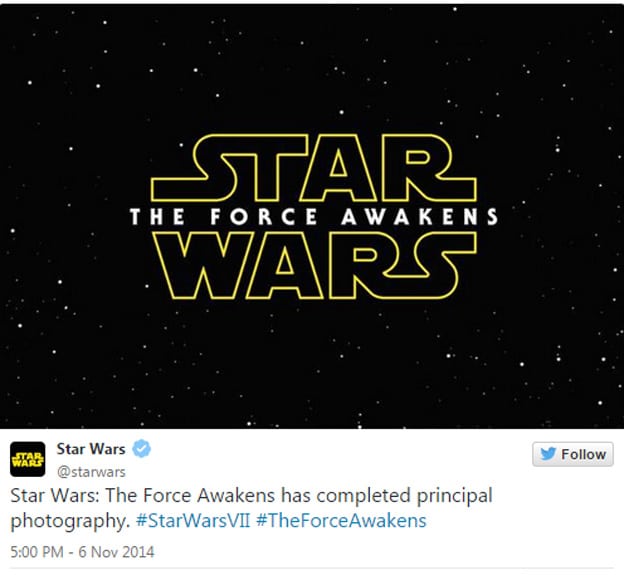 The people behind the official Twitter account of Star Wars had a surprise for fans today; they announced that “The Force Awakens” is the title of Star Wars Episode VII. In addition, they revealed that the J.J.Abrams crew has finished principal photography. 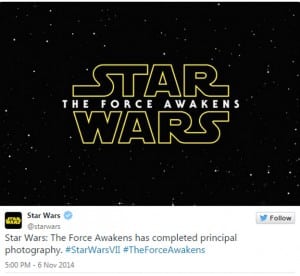 While the title doesn’t reveal much, a lot of websites are already speculating about the story behind Episode VII.

I’m told that in the back story for the film, Luke Skywalker does something amazing with the Force. He’s really powerful, more of “wizard than lightsaber wielding warrior.” Basically, Luke Skywalker has a “Force Unleashed” moment and realizes he might be bad for the universe. The aftermath of that event is difficult for Luke. Luke Skywalker has become the most powerful Jedi ever, but he doesn’t believe he’s the wisest. He doesn’t want to make the mistake his father made by thinking he knows what’s right for the universe. Skywalker becomes somewhat deranged in his seclusion. He is consumed by his fear that if he should return to “society” his power could be misused, he could be manipulated, and he may accidentally hurt the one’s he loves.

For these reasons, to protect the galaxy and himself, Luke retreats into self-imposed exile for many years. I’m told he can’t always control the power. While he sits in a meditative state, he levitates things unconsciously and he’s not always in complete control and he’s never sure if he’s doing the will of the Force or acting on his own passions. Luke is seeing the past, the present, the future, “old friends long gone” and other things that prey upon his sanity. For most of Luke’s appearance in Star Wars: Episode VII, it is questionable if his madness will result in evil. Not even those that have known him for most of his life know if he’s sane or not. However, the villain and the new hero both draw Skywalker out and he’s forced to intervene in the galactic conflict. The imbalance he feared bringing back to the galaxy is set into motion by the new evil. But it is not only evil that brings Luke Skywalker out of exile. The good in the universe does as well when one of the heroes convinces him the place he is in is not where he belongs.

Whether these rumors are true or not, remains to be seen. They certainly sound very interesting though!