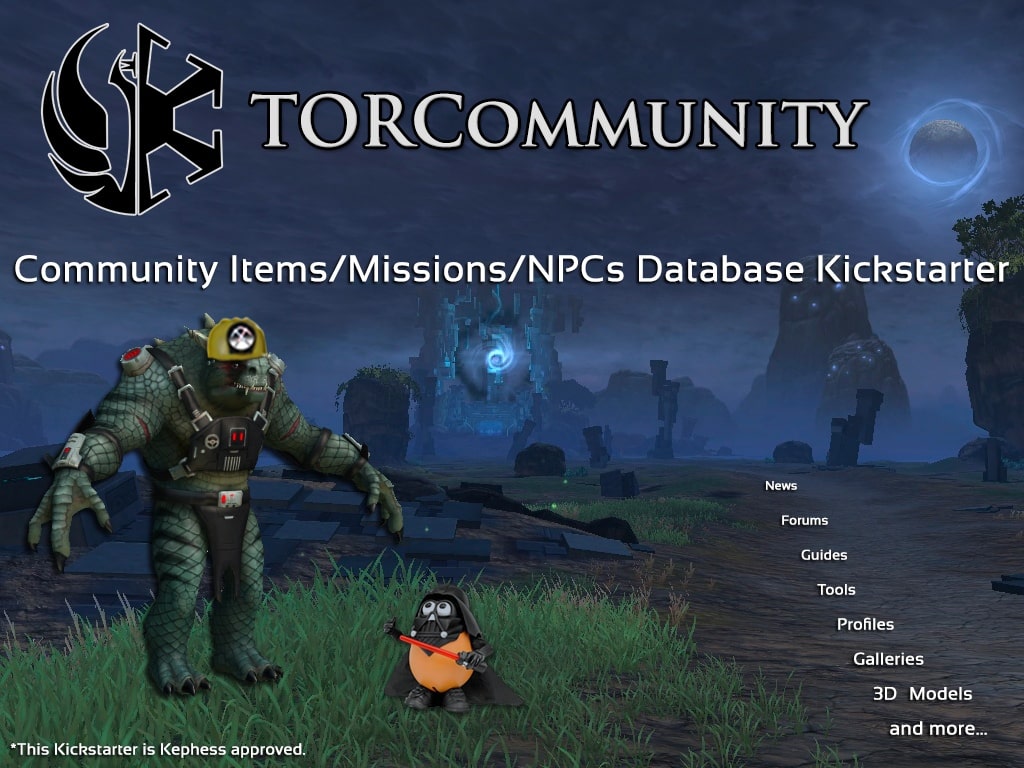 TORCommunity is creating the framework to power SWTOR databases to replace Torhead and Ask Mr. Robot. They need your help to fund them!

Even above and beyond the 120 backers who have funded nearly $5,000 so far, we also have people who are stepping up to volunteer their services such as translating to different languages. This is something I have always found impressive about the SWTOR community over all these years. You all step up when needed to try to make the community better. Sure, there are bad apples in every bunch but overall, the community really cares about the game, about Star Wars and about one another and it shows in the volunteerism many show in times like these.

One thing the community has oft complained about is Bioware’s lack of official tools and API support. This creates hurdles the community has to jump in order to have tools like this and it makes it harder. I can’t really understand why Bioware would object to these types of projects so it doesn’t make a lot of sense that they don’t offer more support on this front. For fans of the game, this lack of support is a real kick in the pants, since it sends an impression (whether intentional or not) that Bioware/EA do not care about the fans… the very people keeping the game alive.

That said, I am always impressed to see members of the SWTOR community step up and get the job done, as they are doing with this project. You can learn more about it below and of course if you choose, you can pledge support of your own.

With Torhead and Ask Mr. Robot closing/no longer supporting Star Wars: The Old Republic, there are no true databases left for Items, NPCs, and Missions in the game. Our team has decided to build and maintain these databases to fill the void and further enhance our already-established fansite, TORCommunity. Unlike other MMO companies like Blizzard (Battle.net API) or Sony Online Entertainment (Census API), Bioware has no APIs for Star Wars: The Old Republic, which makes the construction and maintenance of fansites and databases especially challenging.

Currently, our server hosts both TORCommunity and TORParse, costing roughly $230 per month to maintain. If our Kickstarter is successful, we will not only be able to fund both projects for many months, but will also be able to create Items, NPC, and Mission databases, further expand our server capabilities and performance, and be able to create and release new tools and features at a much faster rate.

Our first priority is creating an interactive items database of all items in Star Wars: The Old Republic to replace TORHead and Ask Mr. Robot. The frontend will be searchable with the ability to filter by item category, stats, type, bind properties, level, rating, and all other assigned in-game attributes.

To accompany our Items Database, we will have Item Tooltips that you can embed on any website. These will allow you to link items so that a small box with stats, the item image, and other item attributes will popup when someone hovers their mouse cursor over the item name.

One of the best features of Ask Mr. Robot, the gear editor/character builder allowed users to choose gear from the SWTOR items database for their characters, pick specific armorings, mods, enhancements, and augments for each piece, and have it display stats and other information that you could then share with friends or embed on your website. We’re developing our own version of this, with added integration with our beta Chracter Profiles, PvP Records, Achievement Tracker, 3D Model Viewer, and various other site tools and features.

We are close to releasing several new “Leaderboards” features that will rank players based on all sorts of categories ranging from PvP Records (things like biggest hit, highest DPS, etc.), GSF Records, Guild Progression, Achievement scores (released this week!), and much more. We are drawing from our TORParse roots and Yusi’s excellent TOFN and TRE Records system to have a modular framework for all future leaderboards, coupled with the ability to track your guild’s progress in clearing SWTOR content.

You can read more about the project, the features and the rewards at the official Kickstarter page.