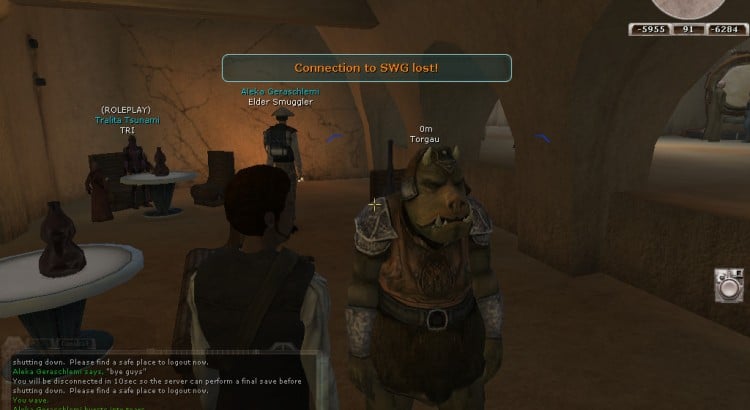 Released in 2003, Star Wars Galaxies was a Star Wars themed MMORPG by Sony Online Entertainment and LucasArts for Microsoft Windows. For those who can remember when the game first came out, it was unlike other games of this genre we had seen. This game put the player in the driver’s seat and gave you more control of things, like never before. Over the years, we’ve seen SWG rise in popularity and fanbase, then fall (and many would say it had failed) and then return and rise again, a big part in thanks to the volunteers who keep the project going since it is no longer officially sponsored.

In “The rise, fall and return of Star Wars Galaxies”, Dennis Scimeca talks about Doug Rush and his history with the game. It’s an interesting look at someone who saw the Star Wars films but didn’t consider themselves a die-hard fan, and someone who also didn’t care for video games, but a copy of SWG would turn all of that around.

“Despite his lack of interest, after two weeks of being hassled by his brother, Rush finally relented and tried the game. In a few hours, he was hooked. Two weeks later, he’d gone from disliking video games to playing Galaxies like it was his full-time job.”

Why do we care about Doug Rush’s experience with SWG? Well, it’s actually because the now-55-year-old has a very important side job. He’s the quality assurance lead on the Star Wars Galaxies emulator project, or SWGEmu, a fan effort to revive one of the most ambitious massively multiplayer online games ever made.

It’s often a labor of love but people like Doug, and all the fans who continue to play and support the project are what keep it alive. You can read the full article over at The Kernel and learn more.