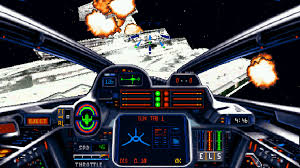 Who remembers the 1993 version of Star Wars: X-Wing? It was one of my favorite games to play as a kid. This was one of the first video games that put you in the driver’s seat of a starfighter. It was a game that would go down in history, especially for Star Wars fans. So what would you do if you could play it again? Well, we’re not the only fans who would like this opportunity and that’s why it’s getting a remake.

X-Wing enthusiast and hobby game developer David Esparza Guerrero wants to make that dream come true for all of us. He’s been working on a project for more than two years that brings Star Wars: X-Wing back to us. It’s called “XWVM Prototype” and is marketed as a community mod that does require a full paid version of the game to play. It’s a mod that will require a copy of X-Wing via CD, GOG.com or Steam once it’s released. His pet project was always meant to remain just in the forums with the fellow fans but after posting his YouTube video of gameplay, it’s gotten a lot of traction and it’s no surprise. So many of us loved this game growing up and the mod quality looks great. Who wouldn’t want to try this out?

You can currently purchase Star Wars: X-Wing Special Edition on GOG.com for US$9.99. Steam also sells the game for the same price. or if you are a collector like me, you can get a physical copy at amazon

You can watch the modded version of the sixth historical Y-Wing mission (Interception and Capture) below:

You can see from the video that the quality is high and it looks really great, by today’s standards. While it’s not a definite, the devs said we might see a released version sometime this month so we will keep you posted if we learn anything new.