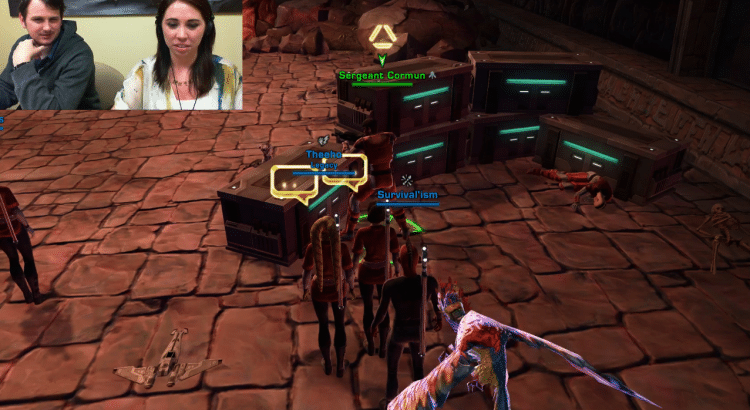 Tait Watson just informed the community that she is leaving Bioware at end of this month and moving to California. Tait started out as a Social Media Representative back when the game was first lunched, and is now ending his Career in BioWare as Assistant Producer for Star Wars the old republic. Below is the new form the official forums:

There have been two forum posts in my time at BioWare that have been difficult to write: my introduction, and this one. For those who prefer brevity, I won’t bury the lead: February will be my final month on the SWTOR team and, in fact, with BioWare. I have had an amazing few years here, but it is time to sail different seas. I will go ahead and nip a few things in the bud because I know they will come up:

Okay, that out of the way, moving on.

“What are you doing now, Tait?”

An excellent question, me. For now, nothing I can disclose career-wise, but if you follow me on Twitter, I’m sure you’ll see soon (It’s @pariahloki. Shameless plug). However, I am leaving Austin and moving to San Diego, where I imagine I will spend a lot of time eating tacos*, playing Frank Turner songs on an acoustic guitar, wishing I could afford more tattoos, and generally trying to be more like I was in 2006 – which is basically just skinnier and more emo. Just kidding. Same amount of emo. That never really went away. Have I ever told you the story about the time I saw Fear Before The March of Flames play on a sheet of plywood in a guy’s backyard in my hometown? There were like 10 people there— you know what? Maybe we’ll cross paths again someday, and I can tell you all about it over some tacos.

People often ask me what I do, and when I say I work for BioWare the natural follow up is “what do you do at BioWare,” and that is a deceptively difficult question to answer. Everyone here sees what I do publicly – primarily maintenance messaging, these days – but the sheer diversity of the things I do behind the scenes is hard to explain. That said, one thing has remained consist between the job titles (three!) I have worn here: advocating for players on a daily basis.

For now, however, I just want to say that, even though there have been rough times, I have never once dreaded coming into work. Not one time in the time I’ve worked here, and a huge part of that is all of you. Yes, you. If you have somehow come across these words on the internet, I am talking to you. You are the beating heart that keeps this vibrant and unabashedly passionate community going, and for that you don’t get enough credit. But I assure you, every single day people come into work and strive to show you just how important you are to us.

And I will miss that the most.

*Okay, but, for real. There is this restaurant/bar in San Diego that has the best fish tacos I’ve ever had and I can’t remember what it is called. Send help. It’s on 3rd, 4th, or 5th within a few blocks of Market. I think it had a small stage in it? I went during SDCC one year.

In honor of Tait leaving, let me share with you my favorite Tait story from his time here. It’s the time that we convinced Tait we were letting him go when we were actually hiring him.

When Tait got hired into his current role, he was hired on as a contractor with the intent we would convert him to be a full-time EA employee in the future. Well when we got approval to “flip” him to full-time, me and Keith (my boss) decided to have a little bit of fun with him.

We brought him into a room and we made sure to both seem pretty somber as we pulled him in. We had to ensure he was on edge thinking something bad was happening. Keith starts the meeting by going into this whole speech about how things are changing around BioWare (they weren’t) and that because of that some changes need to be made (they also weren’t). Keith then ended this speech with three words, “you’ve been impacted.”

Now, this is the part where I was supposed to jump in and be like “surprise, your hired!” However, I was concentrating so hard on not laughing that I didn’t react as fast as I was supposed to. This meant poor Tait was sitting there for like 20 seconds in a dead silent room thinking he just got let go.

Then I handed the folder with his paperwork to him and said “welcome to the team.” Tait reacted by turning red and saying lots of four letter words at us while laughing. It was pretty awesome.

TLDR – That one time we convinced Tait we were letting him go while we were hiring him and it was great.