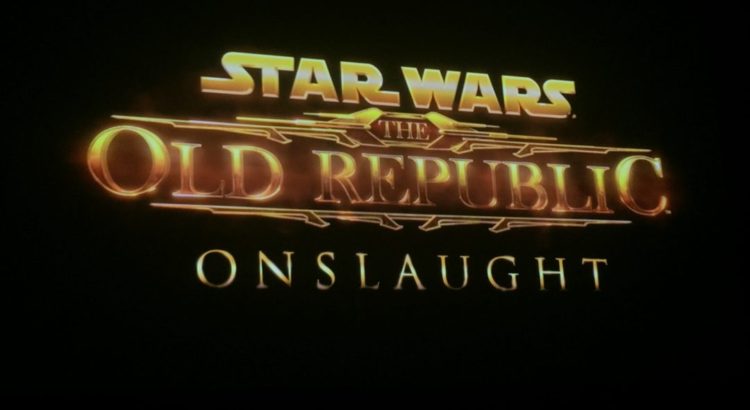 There aren’t as many people playing SWTOR as there used to be. If you’re still a regular player, you’ll already know that. The game isn’t denying- despite unhelpful articles that refer to the Electronic Arts’ Star Wars’ games as a ‘sinking ship’ – but it’s way past the peak of its popularity. You can see that without even logging into the game to check it out. When the game’s official Twitter account announced that ‘Onslaught,’ the seventh expansion pack, will be released in September 2019, the response was less than enthusiastic. The Tweet failed to reach a thousand likes, had barely over two hundred re-tweets, and a little over one hundred comments. All in all, it doesn’t suggest that there’s a massive base of players out there, waiting to seize on the new content and jump back in.

Given the declining numbers, we’re faced with a question. Is ‘Onslaught’ an attempt to revitalize the eight-year-old game, or is it a way of saying goodbye to it?

In many ways, EA hasn’t helped themselves with their recent treatment of SWTOR. They used to be very attentive to the game and its base of players, providing regular updates and plenty of fresh content to keep players interested. The first expansion pack, ‘Rise of the Hutt Cartel,’ was released in April 2013 – less than eighteen months after the launch of the original game. 2014 saw three new releases; ‘Galactic Starfighter,’ ‘Galactic Strongholds,’ and ‘Shadow of Revan.’ We were back down to one for 2015, with ‘Knights of the Fallen Empire’ coming out in October of that year. It was then fourteen months until ‘Knights Of The Eternal Throne’ was released in December 2016.

After that, everything went quiet. No new expansion packs were released in 2017, so players expected to see something in 2018. As last year drew to a close, the inevitable whispers started to begin about EA losing interest in the product. Although the game was making something in the region of $100m annually, it was also understood to have cost close to $400m in development costs. By 2016, EA would have made their money back. There was seemingly no incentive for them to take it any further.

Much as we hate to go back to the same comparison between franchises that everybody makes, compare EA’s handling of SWTOR with Cryptic Studios’ approach to ‘Star Trek Online.’ We can all agree that SWTOR is a vastly superior game, but the more measured approach that Cryptic Studios have taken to releasing content for their game – and their constant communication with players – has led to ‘Star Trek Online’ retaining players in a way that SWTOR has struggled to in recent years. They even publish a roadmap, which means players are always aware of what’s supposed to be happening, and when. It may be past its best – and it looks rougher around the edges than SWTOR – but it’s never been left untouched for three years, pending an update.

Cashing In Or Cashing Out?

The most frustrating thing about the way SWTOR has been handled is that EA could easily have made more money if they’d put the effort in; at one point, there were plenty of plays who’d happily have paid it. No fan group likes to be taken advantage of, but if there’s one thing ‘Star Wars’ fans have proven over the years, it’s the fact we’ll pay for good quality products. No matter how good or bad we’re told the latest game or film is, we line up like it’s a casino game and put out money in, hoping that in return we’ll get something worth whatever we paid. EA just doesn’t seem to have been aware that they were running the casino.

The right to make ‘Star Wars’ games should be a license to print money, but with STWOR it’s like they don’t want to. In fact, while we’re talking about UK Slots, why have EA not created an official UK slots game based on ‘Star Wars?’ Every other major entertainment franchise has one, but ‘Star Wars’ doesn’t. Money is being left on the table, and players are being left without games. Nobody wins.

All of this brings us to ‘Onslaught.’ After such a long time without an update, the timing of the latest release is interesting. EA will have been aware that player numbers are in steep decline. Presumably, that would mean that the number of paid subscribers is also at an all-time low, and therefore, EA’s revenues are down. Is ‘Onslaught’ arriving now because they’ve been working on getting it right for the past three years, or is it arriving now because they want a new hook to sell subscriptions with?

What Do We Actually Get?

The short answer is ‘more war.’ The long answer is ‘quite a lot of the things we’ve been asking EA to give us for years.’ This is not a small update. It contains new abilities, a whole new story, new planets, a brand new operation, and a new flashpoint. All of it revolves around the new Republic-Sith war, and offers you the chance to play a warrior or a saboteur.

Darth Malgus is back on the scene (as we already know), and is backed by an entire Sith fleet. He’s got the Republic in his crosshairs, and he’s coming to tear it apart. Whether you play with him or against him is – as always – up to you, but it sounds like it could potentially be good ‘Star Wars’ content. That’s all we’ve ever really wanted.

In terms of planets, we’ve been promised that Onderon is a jungle world full of new creatures, and Mek-Sha is a classic ‘mine in an asteroid’ hangout full of pirates, traders, and career criminals. We wouldn’t be surprised to see it contain a variation on the cantina.

On top of all the action, there will be a new species in the SWTOR world, going by the name of the Nautolans. The green-headed creatures will be playable characters, so it’s a chance to completely freshen up the way you play the game if you so desire. After three years, we’d be more surprised if you didn’t.

Whether ‘Onslaught’ is the end of this game or the start of a new beginning won’t be clear until after it’s released. The description of the content sounds good, but then it always does. The only metric that will matter is whether it moves the needle in terms of how subscription money EA is receiving. If that figure goes up, then we can start hoping for more new content in 2020. If it doesn’t, then this could be the end of the road.