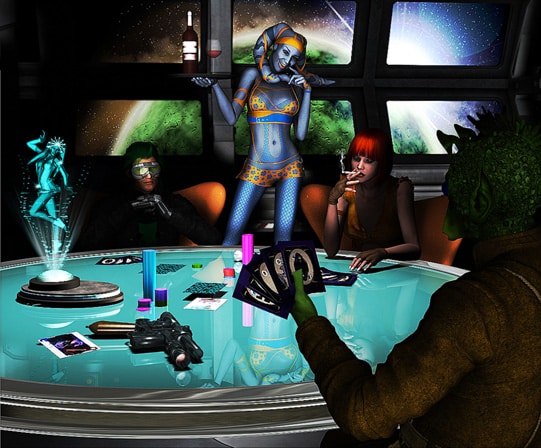 Fantasy card games are all the rage right now. As technology is allowing for greater possibilities, new ways of playing cards are becoming more abundant. Developers are desperately trying to create the next Hearthstone, but putting a working card game together is harder than you might expect. Sabacc, which was made into an app game in 2015, was conceived decades ago but only recently became well-known thanks to Solo: A Star Wars Story. To anyone interested in starting their own card game, it is wise to look at how some others came into existence.

The Star Wars galactic card game Sabacc was mentioned in the 1980 picture, The Empire Strikes Back, when Han Solo says that Lando Calrissian won Cloud City from playing the game. More recently, it came to light that Solo himself had won big in the card game, and it was through playing it that he acquired the Millennium Falcon. There is a lot of fictional history behind its origins, and there are said to be eighty variants of it. It is similar to online poker in this sense, where there are many different ways of playing the bluffing game, from Texas Hold’em to seven card stud. It also takes an idea from poker in that it is possible to lose even when you are holding the stronger hand.

Sabacc cards have been available as a collectible Star Wars item for some time, but it wasn’t until recently that the game was made playable by Sabacc Creative Industries in their 2015 app. Other fantasy card games have come about after being part of another franchise, and this appears to be a key element in determining whether they gain traction or not.

Magic: The Gathering is often credited with starting the fantasy card game craze, and the Dungeons and Dragons-inspired offering from Wizards of the Coast was released as a collectible trading card game in 1993. More recently, it was remodelled into a digital version which has been hugely popular. One of the best-known titles around now is Hearthstone, which is a massive player in the growing eSports scene. This came about as a spinoff from World of Warcraft, so it was able to attract players from the MMORPG in its early days before it gained such a great reputation. CD Projekt Red’s Gwent followed a similar path, and originally appeared in The Witcher 3: Wild Hunt as a side game. It seems that for a game to become popular, it should sprout from another part of a successful franchise.

The internet has made it possible for fantasy card games to thrive, because it is so easy to start a game with anyone from all over the world. Developers have to constantly update and balance the games, though, to make sure the playing field remains fair. The games that release new content on a regular basis are the ones that seem to survive the longest.