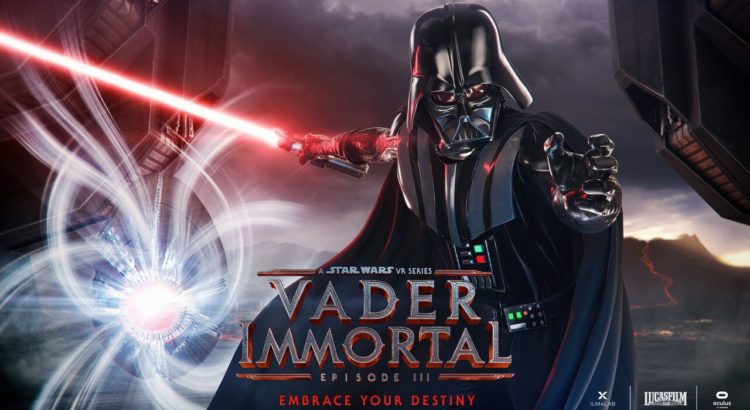 Have you played Vader Immortal for the PlayStation VR yet? This is a game I was excited about, as it looks like a lot of fun. The creators of Vader Immortal are revealing more about how the VR game came together.

In the game, you can step into the role of a Force-using smuggler who gets captured by Darth himself. To help celebrate the release, the game creators got together for a VR chat to discuss how this game actually came together.

The discussion was released a couple of weeks ago and if you missed it, we’ll give you all the info you need to know. It featured Writer and Executive Producer David S. Goyer, Director Ben Snow, Executive Producer Mark S. Miller, and ILMxLAB Lead QA Marissa Martinez-Hoadley.

They talked about their favorite moments, challenges in production and so much more.

Martinez-Hoadley said the game was so immersive, she found herself trying to use the Force at home without VR. “Once the Force was introduced in the game, I would spend all week using the Force, and then go home on the weekend and sit on my couch and the remote control would be over there. And I couldn’t get it!”

Hosted by Star Wars fan and StarWars.com contributor, Kelly Knox, the creative team behind Vader Immortal reconnects and shares their favorite memories of what it was like to create a new canonical story centered around one of the most iconic characters in the Star Wars galaxy.

Featuring Writer & Executive Producer David S. Goyer, Director Ben Snow, Executive Producer Mark S. Miller, and ILMxLAB Lead QA Marissa Martinez-Hoadley, the conversation uncovers everything from how this project all began to how the Lightsaber Dojo makes you really feel like you have the Force, and what it was like working with Maya Rudolph, the voice behind droid companion ZO-E3.

Did you learn anything new about the game from this panel? It’s always a lot of fun to go behind the scenes into the creation of a game with the very people who created it. Personally, I enjoyed this.