Podracing was a popular sport in the less developed regions of the galaxy. It has been called “the ultimate test of skill and daring on Tatooine,” and was certainly one of the most dangerous sports ever invented, killing many racers. 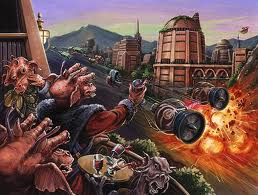 Characterisitics
Besides housing the racer’s pilot, each pod contained a repulsorlift engine that kept the craft at a specific, low-level altitude. The turbine engines were incredibly powerful, and were connected by an energy binder that kept them from flying apart. Podracing was popularized in the Outer Rim Territories during the last decades of the Galactic Republic. Its underground nature, great excitement, and almost gladiatorial propensity for carnage held immense appeal to all manner of folk living on the fringes of society.

History
Podracing traced its roots back to the days of animal-drawn carts, from which evolved races with hanno speeders. Ultimately, this sport’s development kept pace with that of galactic technology to evolve into Podracing. The concept of modern day podracing was started on Malastare by alien racer Gustab Wenbus. Wenbus had entered himself in a race with a super-fast prototype pod designed by a mechanic named Phoebos. 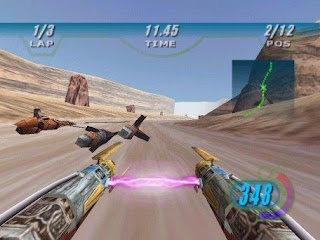 One of the most famous Podraces was the Boonta Eve Classic, held on Tatooine in 32 BBY. The spectacular race was especially notable for being won by a Human, nine-year-old Anakin Skywalker. This marked the first time a Human had ever won a Podrace. Other popular races at the time included the Vinta Harvest Classic on Malastare, the Ando Overland on Ando Prime and the Aleen Classic.

Although technically illegal (often controlled by the Hutts) Podracing flourished during the rule of the Galactic Republic, particularly among planets in the Outer Rim and on worlds such as Malastare and Ando Prime. The sport was also watched by citizens from the Core Worlds; large viewscreens in seedy establishments such as the Outlander Club on Coruscant relayed Podraces from all over the Rim territories. Podracing’s popularity reached an all-time high following Skywalker’s win, but as the political situation in the Republic deteriorated, so did the appeal of Podracing.

Many of the sport’s generally-accepted criminal activities were exposed, and some of the most famous racers were arrested for a variety of crimes. Podracing was soon outlawed in the Core. Shortly before the outbreak of the Clone Wars, it was reported that attendance had dropped more than fifty percent from the era of the Battle of Naboo, although betting transactions remained at an all-time high. Podracing soon gave way to swoop racing and other forms of extreme sports.

With the Declaration of the New Order and the rise of the Galactic Empire, Podracing became outlawed, and under the Empire’s far more stringent standards of law enforcement, the sport fell out of popularity altogether, though by 30 ABY, it was noted that the sport had been making a comeback in some systems.