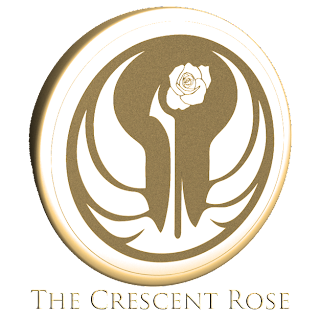 This week I sat down with one of the admissions officials with the The Crescent Rose, a republic RP guild guild focusing on PvE and some PvP. These guys has really thought over everything, so enjoy:


Where did your guilds name come from?
In every game, we spend time finding a new guild backstory to suit the lore, and we take a name that will suit that backstory. It’s more work, but it gives us a chance to look at the world, and also self-examine every so often.

Here, our background writers looked at a few things: The idea that the Republic and Empire aren’t in open conflict, but in a cold war, the thought that Force classes are likely going to be very popular, concepts of secrecy, and we started playing with words and images that would fit those ideas. The word “Subrosa,” or “Under the rose,” got thrown around, and it was a good starting point – it’s a wonderful clandestine word, but we wanted to expand on it.

We really liked the imagery of a blue rose – a symbol of attaining the impossible – under a crescent moon. Roses have multiple visuals – there’s the softness of petals, and romance, but they can also be dangerous from thorns. Crescent comes in with the moon, but it’s again a sharp word, and can bring the idea of some of the curved knives of the present world to mind. So it’s a work trying to balance gentleness and hidden (or overt) threat and danger, much as the Republic must be in this period.

Can you give me a quick 2-3 sentence description of your guild?
We’re a light to medium role play guild that caters to and understands that real life comes first, the guild second, emphasizing a drama and stress-free experience for SWTOR. We hope to create a place for friends to gather to experience everything the game has to offer, including PvE, PvP, and RP, letting everyone to be able to experience the game at their own pace, including the daily grind of leveling, and the end game content such as raiding. In the end, we’re about having fun gaming together and finding a little RP when possible.

How did your guild come about?
The core of the guild came together with the NA launch of Aion in 2009, but some of us formed bonds well before. We’ve played several games, including AoC, LotRO, and DCUO together, but we’re hoping to make SWTOR our home for the long run.

What kind of play style do you focus on? PvE, PvP, RP:
We’re labeled as an RP guild in the TOR directory, but none of these play styles really have to be exclusionary. We came of age in a PvPvE game, and there’s something to be said for both the PvE and PvP playstyle. We’ll focus on RP/PvE, but quite a few of our members enjoy PvP.

What is your guild set up? How do you run your guild?
We enjoy a “round table” arrangement – it’s one of the benefits of a small guild. Of course, in cases of a deadlock, we do have someone holding the big lightsaber to break up arguments.

How serious do you play and/or run the guild?
Just serious enough. We play hard, but we also have a lot of fun, and a lot of laughs. It’s a reflection on life – it’s not always a laugh, but if you don’t laugh, you won’t get through it.

Do you have ranks or a certain hierarchy in your guild?
We’re still looking at this. We don’t want to be too stratified, but we would like to recognize those who supported us while we were still forming, and before launch. Names have meaning, especially in RP guilds.

Why did you choose the Republic?
Some of our members deal enough with evil that trying to delve into that mindset is unattractive. And it’s hard to envision a “hero’s journey” from that standpoint. Sure, it could be presented as a challenge, but why take on a game that’s always a challenge? We’re here to relax and have fun. There are ways to make a character a challenge if a player wants one, and have the option of having an easier character if that’s what someone is in the mind for at the time.

Why do you run a guild?
When we formed the guild in Aion, there didn’t seem to be any of the kind we were looking for on our server and morality – small casual guilds on the Elyos RP server. There were larger guilds, military guilds, rogues’ guilds, and so on. Nothing that spoke to us. So we had to write our own story, as it were. We had experience in running them prior to Aion, but with the concept of “small and drama free” there was no looking back from there.

How do you approach Raid Planning?
That’s a good question. In the past we’ve had to rely heavily on pickup groups because of preferring a smaller guild, and particular game mechanics. So there was never a lot of “us” doing the planning. With SWTOR, this doesn’t look like it will be an issue. Already we are at raid size, and given the few guild alliances we have, it looks like we’ll be doing our “raiding” as a family. As far as planning, we’ll approach it like we do everything – everyone has their say in how and when it happens.

Are you always open for new recruits or do you want to keep a certain guild size?
We’d like to stay small enough so that we always know all our members. However, we know that there’s always an element of turnover that means that there will be places for new recruits, and we aren’t going to set a hard limit on numbers. We’ll cross those bridges as we come to them.

Age Requirement?
This is more a maturity issue than anything else. However, since we’re based in the US, we’ve set it at 18. (COPPA is a pain.)

Guild size?
We’re at 15 on the TOR site roster, and most of those are active on our site regularly.

I’d say it’s that our members are wonderfully talented, and funny, and are just great people. We have moviemakers and artists and comedians and writers and I’m sure other undiscovered talent. Our biggest recruitment draw has been our movies. Thank you, Sinjin!

And when we say that real life comes first, we mean it.

What Other Games are you currently playing as a guild?
Nothing so far. The moment we choose a game to pass the time, Bioware will end up giving us a release date. That’s how these things work, you know. There are a few members with their hooks in other games, but for many of us we’re throwing all our eggs in one basket with SWTOR. That must mean something considering the game isn’t even out yet!

If somebody is interested now how and where can they apply for membership?
Come visit us at http://www.crescent-rose.com and see if you like our style. We don’t have an involved formal application process – it doesn’t suit us as a guild. It’s more about making sure we suit you as a guild, and you suit us as a member. The only thing we do like is if an applicant submits a request on the TOR site, just for sake of unity.

One last question, if there was one thing you could ask the Dev’s to include, what would it be?
That’s simple for me. I’d like to see the guild capital ships develop soon. It may not seem like much, but if you’re a RP guild particularly, it can play a major role. I think most of us at TCR would like to see the space combat experience expanded on in the future, also.