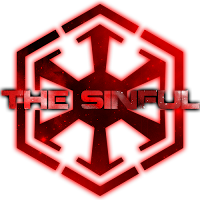 It’s Thursday, and time for the second guild feature of the week. This time we Finnish Sith guild “SinFul” took the time answer our questions.

Where did your guilds name come from?
The SinFul is trying to describe the Darkside players as being sinful beings. Also as a Finnish guild, the capital S comes from Suomi and the capital F from Finland. So we sometimes use the abbreviation TSF.

Can you give me a quick 2-3 sentence description of your guild?
Finnish only guild that aims to experience the whole scale of SWTOR which means both PvE and PvP end-game content. Our main principle is having fun as a guild. Because of that we will maintain the fun and positive atmosphere. That way we believe we can achieve moderate or even hardcore achievements in the game content progression.

How did your guild come about?
Our leaders were part of a republic guild, but we were consumed by the Darkside of the Force (just kidding). We were the ones who were the most active in IRC and on the forums, thus we felt the need to do more, so we decided to start our own guild. For the earlier experience of leading a guild (since Pre-CU SWG and WoW) we felt we had more to give for a guild as leaders. Another reason why we decided to make The Sith Empire guild, was because the Empire has more interesting classes to play with.

What kind of play style do you focus on?
PvE, PvP, RP: Our main objective is the end-game PvE progress, but we aim to have some serious business on the PvP field.

What is your guild setup? How do you run your guild?
Before the game itself launches, leaders maintain and develop special guild features. MyPlague: Website, forums, domain, emails, etc Darksimo: IRC Ruksi: Mumble  Officers help the leaders if needed. After the launch the leaders will appoint an officer to lead a special task, such as a PvE-leader or as a PvP-leader. The leaders will decide the biggest chances in the guild structure so it can remain as a working society.

How serious do you play and/or run the guild?
We decided to be a moderate to hardcore guild. Our plan is to have a few different groups to begin with, and then select the most dedicated players who will form the main progressing raid group. Of course we won’t forget our other players, as we also aim to have some casual groups as well. And with enough players we will have more progressing groups.

Do you have ranks or a certain hierarchy in your guild?
We have 3 leaders who are the founders of this guild, and they decide the most important things. Officers will also have a say in matters concerning the guild. To summarize how we deal with decisions, it’s a democracy. Even the members and applicants have their say on how we lead this guild.

Why did you choose the Republic / the Sith empire?
The Sith Empire has the most interesting classes in our opinion. Also the Darkside gives a more interesting perspective on the game.

Why do you run a guild?
As mentioned before we felt that we have more to give as leaders than as normal members. It’s also a challenge for us to get this guild running as best as it can be.

How do you approach Raid Planning?
We cannot give any special information about this because we don’t know how the game mechanics will work.


Are you always open for new recruits or do you want to keep a certain guild size?
Before the launch we are open to all applications. After the launch we aim to keep our doors open for the needed classes and advanced classes to support our raid progress. Although we will accept all players who apply to our guild, but we cannot guarantee a raid spot for PvE. We are and will be looking for PvP players as well.

Age Requirement?
Our minimum age is 18.

Guild size?
We hope to be a bigger guild. At the moment we have over 20 members. We aim to grow somewhere near 50, but more the merrier.


How do you spend your time until release? Do you know each other in real life or do you spend a lot of time on forums?
We already have a Mumble-server running and a public IRC-channel @Quakenet, #thesinful. There is also a guild’s private channel. We have opened a website and forums on http://www.thesinful.net/


What Other Games are you currently playing as a guild?
Some of our members are playing Team Fortress 2 together at the moment.

If somebody is interested now how and where can they apply for membership?
http://www.thesinful.net/apply.php

One last question, if there was one thing you could ask the Dev’s to include, what would it be?
Because we have 3 leaders I will use my own right to give a three part answer: