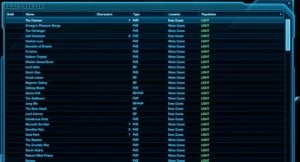 Exiting news today, as BioWare updates us on the upcoming server transfers and details on how the transfers will work and when to expect to see them. If you can hold your breath, the Character transfers will be june 12. yes that’s right, in 6 days! Transfers have it’s limitations though, but Joveth Gonzalez and Allison Berryman have posted some clarifications on the official forums regarding how transfers will work. You can read it all later on in this post, but first check out TORWARS interview with James Ohlen on Impending Character Transfers:

Character Transfer, Server Populations and You

In a previous Community Q&A we talked about character transfers, and announced that they were coming in early summer. Character transfers are a complex process, but we’re almost ready to go. Starting next week on June 12th, 2012, we’re allowing character transfers to occur between selected servers in order to provide a better gameplay experience for our players by ensuring population balance across the service.

Game Update 1.3 is focused around group content, with the Group Finder designed to help you enjoy Flashpoints, Operations and Heroic Missions in groups. However, we know that a Group Finder can only work when there is a large pool of players to draw from on a server. That’s why the new Character Transfer Service is important: it will improve the overall player experience by facilitating maximized server populations across the service.

How will it work?

Initially we considered allowing players to transfer to any server they wished, or to a variety of different servers. However, on a massive scale, this free-for-all approach causes potential problems. Players who are anxious to ensure they end up on a heavily populated server will naturally flock to what is perceived as the ‘biggest’ server, potentially over-populating that server. This eventually leads to the exact situation we’re trying to move away from. Our aim is to maximize server population across the entire service and to enhance the gameplay experience for our players.

This process will be gradual and staged over time. Despite huge improvements being made to the Character Transfer Service by our server team, there are millions of characters to be moved and there is a limit to how many can be moved daily. We want your character to be transferred as quickly as possible, but we will need you to be patient as the process completes. Once your transfer starts we estimate it will complete in a few hours, but with the potential volume of transfers occurring, you may find your character is queued for transfer for a while as we deal with the high volume.

We’re sure many of you are interested to learn which servers are eligible for outgoing transfers and which servers are eligible to receive transfers. However, because the process will be gradual, we cannot provide that information in advance. Depending on the number of characters transferred, the destination and origin servers eligible for transfer may be altered during the process. We don’t want to promise a destination in case it may change. Listings will become available as servers become eligible for transfer. We can tell you that all server types and languages will be respected. You will not find your PvE characters transferred to a PvP server, or vice versa!

There are also some restrictions to this character transfer process , which will be more fully detailed in a forthcoming FAQ. For those who have unlocked Legacy abilities, your Legacy will be transferred to your new server and your unlocks will be available there too. If you have already unlocked your Legacy on your destination server, the higher level Legacy will take precedence. For guild members and masters, you will not be able to transfer your guild as a whole to your new server; instead you will need to reform it. If you have a guild bank, it will be re-granted to your new guild on your destination server by Customer Service. This is not an automatic process and you will have to contact Customer Service directly. If your transferred character’s name conflicts with an existing name on a destination server, you will be asked to rename your character. In the case of Legacy names, unless you have unlocked your Legacy on your destination server, you will need to rename your Legacy upon transfer (although you may pick the same Legacy name as on your origin server, if available).

We believe that by carefully allowing character transfer between select origin and destination servers, players will have a healthier gameplay experience. With the Group Finder available in Game Update 1.3, we intend for players to be able to easily assemble full groups for all sorts of content.

We understand that some of you may be looking to consolidate characters from a variety of origin servers onto one server, and others may be anxious to move to a specific server to be with friends. With the restrictions of this initial service, that may not be possible. We still believe that you will enjoy playing on a higher population server and hope you’ll take advantage of the service, but you won’t be forced to transfer. Future versions of the Character Transfer Service may allow more options in your choice of destination servers and may require a transfer fee. While we do not have a scheduled time frame for the launch of such a service, we are committed to making improvements to the Character Transfer Service over time to provide players with a great gameplay experience. Stay tuned to www.StarWarsTheOldRepublic.com for more details!

We’ve been working as fast as we can to create a viable Character Transfer Service and we appreciate your patience as we’ve worked to create it. The good news is that the wait is almost over. We’re in the final stretch of testing the service, and our release is now June 12th, 2012. Game Update 1.3 will be along not too long afterwards. We hope that the character transfer and the Group Finder will help everyone experience the full array of content available in Star Wars™: The Old Republic™.

Joveth GonzalezMany guild leaders have contacted us with their concerns about coordinating their guild members in preparation for the free character transfer service and I wanted to take some time to explain how this process will work.

In order to ensure an optimal playing experience for every server, we’ll be offering direct transfers from one origin server to a pre-selected destination server. This means that the destination server will already be selected for the origin server. As mentioned in our blog post, all server types and languages will be respected. You will not find your PvE characters transferred to a PvP server, or vice versa.

Therefore, all guild members on the origin server will be eligible to transfer to the same destination server, ensuring that the guild has the opportunity to stay together.

As we mentioned in our blog, the character transfer service will be made available gradually, starting with a small number of origin servers and adding more until all servers eligible for transfer are available in the service. We know everyone is excited for the opportunity to transfer their characters, but it is critical that we do this gradually to ensure both a smooth transfer as well as a great player experience on the destination servers.

Eligible servers will be listed as they become available for transfers at www.swtor.com/transfer, which will go live on Tuesday. This is to prevent potential server load issues.

Please note that we will not be dividing the population of an origin server onto multiple destination servers for this free character transfer process.

We hope that this clarifies any confusion.

Am i right about this or am i understanding it wrong ?”

This is correct for the free character transfer service.

“We’re sure many of you are interested to learn which servers are eligible for outgoing transfers and which servers are eligible to receive transfers. However, because the process will be gradual, we cannot provide that information in advance. Depending on the number of characters transferred, the destination and origin servers eligible for transfer may be altered during the process. We don’t want to promise a destination in case it may change.”

What I interpret this to mean, is there’s no guarantee my guildmates will end up transfered to the same server as me (I’m the GM of a guild on Kinrath Spider)

I’d love to get clarification on this”

It looks like this line is causing a little bit of confusion. Hopefully I can help clear that up! What we’re saying here is that we’re unable to provide the origins and destinations in advance because those lists may change internally as we watch the response to transfers. We’ll be monitoring populations and how many players are transferring, which will inform our decisions about further origin and destination servers. We won’t be changing the destination on you once it’s announced, we just don’t want to announce a pair too early.

Allison BerrymanQuote: Originally Posted by bawker
“When do we get to pick where we want to transfer, Allison?

How much will it inevitably cost?”

Right now, we’re just talking about the free character transfers – like it mentions in the blog, more options may become available in the future, but that’s all we’ve said as of now.

Allison BerrymanQuote:
Originally Posted by bawker
“The metrics have been there to study for a while . . .since we have no choice of where we’re going to go, BioWare obviously has at least some idea of what pairs are where.”

We haven’t finalized the initial list of origin and destination servers. We know everyone is eager to see them, and we will provide them when we’re able – we don’t want to provide a list and then have to change it.

To quote directly from the blog: