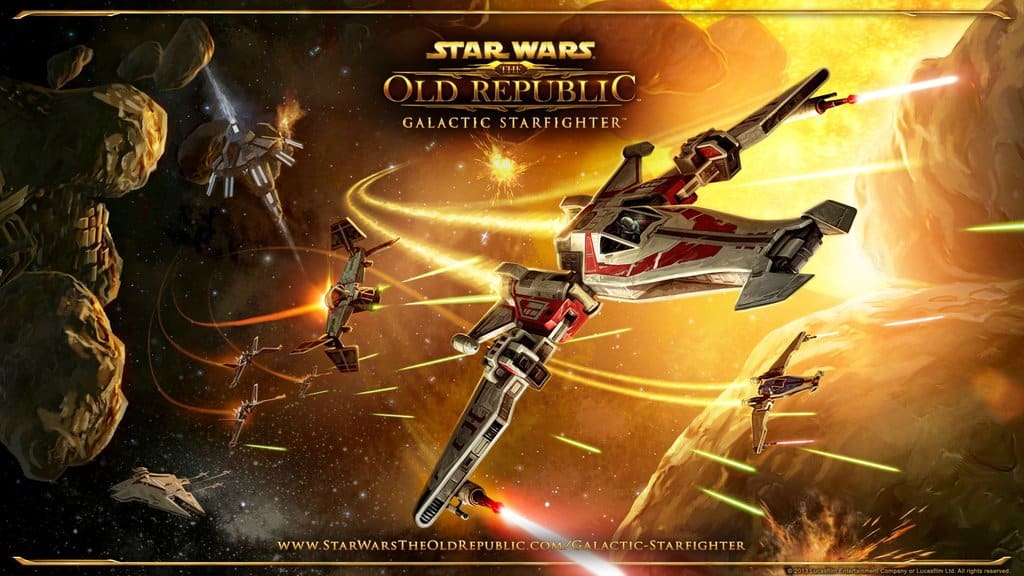 Early access to Star Wars: The old Republic – Galactic Starfighter is on, and the space battle have begun. With the new patch, comes a new developer blog post, and a short Starfighter Customization Trailer.   The blog post is made by Senior Producer Blaine Christine and is pretty much just a welcome message.  Below is a copy/paste of the blog post for you who can’t acces swtor.com from work.

Also remember to check out the video in the bottom of  this post:

Hello, Starfighters! It is with great pleasure that we swing open the doors to our second Digital Expansion of 2013. This one has been a long time coming and we are incredibly proud of the experience we have in store for you.

Galactic Starfighter is a 12v12 PvP free flight space shooter. At its core, it is all about coming as close as we can to recreating the incredible experience of space combat as seen in the Star Wars™ movies. It is fast, furious dogfighting action where you get to choose your style of play by selecting the Starfighter that is right for you, be it Scout, Strike Fighter or Gunship (or all of the above!), blowing up your enemies, and then using Requisition (experience) to upgrade and customize your ships.

From the start, we wanted to make sure that we nailed the feel of “free flight” Star Wars space combat, so we’ve taken great pains to get the controls just right. It is flat out fun to simply fly your ship through the battle zones we’ve created. The Scout feels zippy and maneuverable, the Strike Fighter nails the all-purpose combat role, and the Gunship is really, really good at picking off targets from long range then relocating to the next cover point to keep out of harm’s way.

Finally, there are a TON of options for customization. And I’m not just talking about re-painting your ship (though I recommend that you do!). I mean swapping out your weapons and engines and SEEING the actual ship change shape, while altering your stats and abilities. I’m talking about equipping Treek as your co-pilot and hearing her chirp at you when an enemy is locking onto you with missiles. PLUS repainting your ship, recoloring your paint job, customizing the color of your blaster bolts and your engine trails. Beyond the visual and audio customizations, Major and Minor components plus Crew equal a HUGE number of stat and ability changes that allow you to tweak your Starfighter to your heart’s content and the Major and Minor components all have full upgrade paths as well.

This is a HUGE update to the game and we expect you’ll be playing and enjoying Galactic Starfighter for years to come.

I want to take a moment to point out that this feature is just getting started. What do I mean by that? Well, for Early Access we will have two very distinct battle zones and one game mode plus fourteen unique Starfighters with all of the customizations mentioned above, but that’s not even our full Launch content! Galactic Starfighter is much more than that. In February for our full Launch, we add a new role (the Bomber) plus 10 more Starfighters for a grand total of 24 ships to customize and take into battle. Add to that an incredible new dynamic Flashpoint that is level and role neutral called Kuat Driveyards which ties our ground game story directly into the space PvP action with a new Starfighter area on the fleet and you begin to see that full scope of what we’re delivering.

Taking it one step beyond, we have already laid out significant plans for Space PvP to support it far into the future, so there will be regular releases of content to keep our Starfighters happy for a good long time to come. As with everything in our game, we will be listening raptly on all available channels for YOUR input to shape what Starfighter becomes as it evolves. Thank you for your ongoing support. It means the world to us.