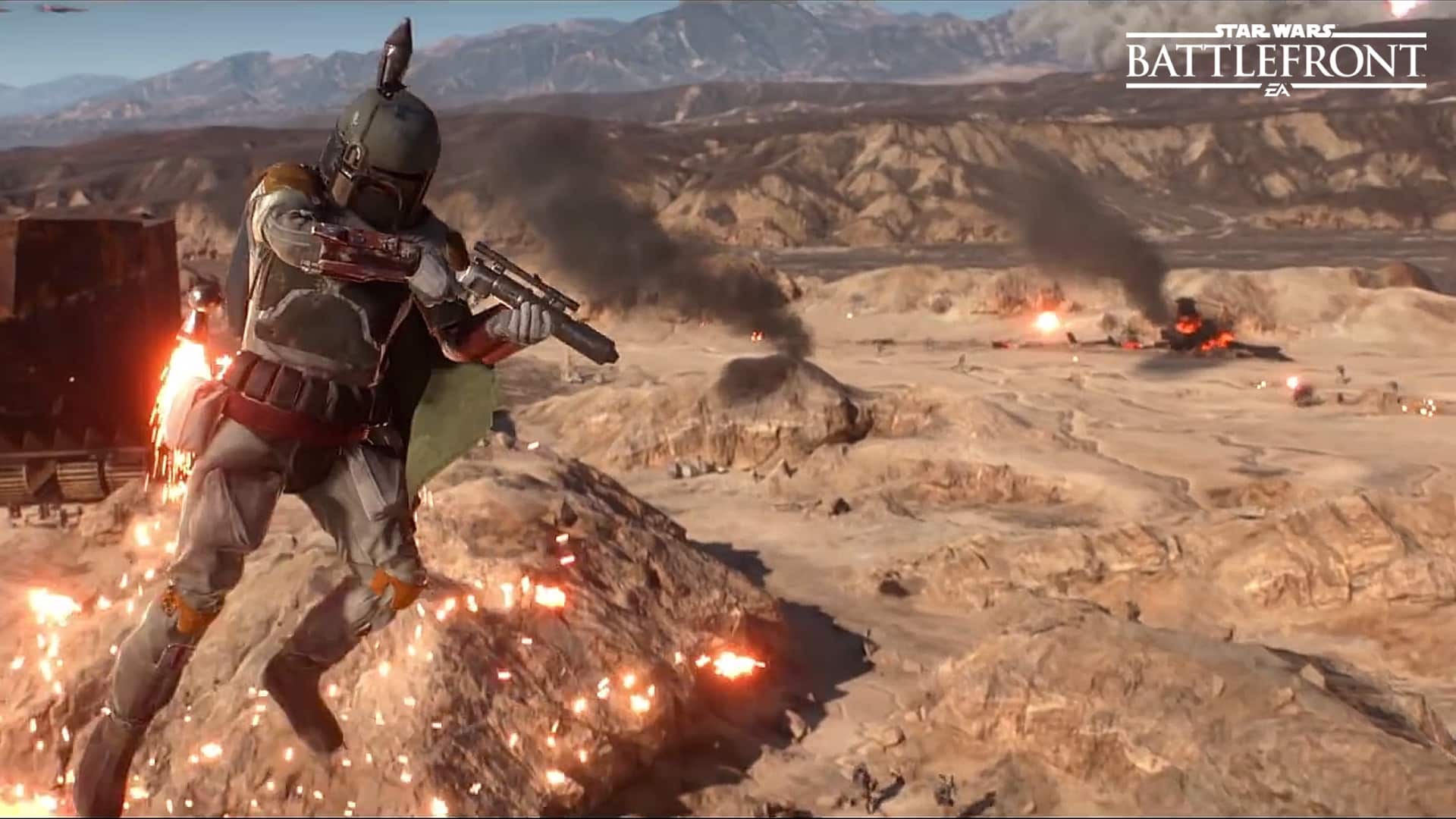 Every fan of Star Wars has their own vision and thoughts of what Boba Fett is all about. This is what DICE Senior Producer Jamie Keen thinks: “He became an instant favorite on the floor. All the developers at our office have their own determined, passionate view on what Boba Fett should be.”

Every single fan of Star Wars, not only just the DICE developers, have a special place in their hearts for the bounty hunter. Boba Fett is one of the iconic villains that will be playable in Star Wars: Battlefront and he is designed to be a dreaded force during battle. His special mobility and deadly lot of weapons will send you running if you spot him on the battlefront. One of the greatest fantasies of actually walking in his boots will finally be a reality.

When they made the decision to select Boba Fett’s in-game arsenal, the team relied on what is shown in the original trilogy and beyond, as Keen explains:

“As originally portrayed in the films, Boba Fett has a wealth of gadgets at his disposal but we only see him use a fraction of these in the films. There’s much more than the jetpack and blaster rifle going on. Boba Fett’s got a disintegrator pistol, a flame pack in one arm, rockets, dart launchers, and even lasers. So there was a lot to choose from before we wound up with the final loadout.”

All depending on what you’re playing style is, Boba Fett could become one of your favorite Hero or Villain characters in the new game. If you prefer charging your enemy with melee attacks, then characters like Luke Skywalker and Darth Vader might be better choices for you. But, if you prefer moving swiftly and keeping distance from the enemies, Boba Fett is the perfect choice for you. By mastering his airborne abilities, you will be able to escape death above the ground while taking down enemies as you go.

“When we first designed Boba Fett’s flight pack, it quickly became clear that the ability to fly unhindered was very powerful compared to other characters who didn’t have that ability,” Jamie Keen explains. “For instance, when Boba Fett was facing off with Luke Skywalker in early development, it was unbalanced as there were no limitations placed upon his flight capability. That’s why we’ve added a fuel mechanic which forces Boba Fett to land from time to time before he can take off again.”

Let’s say you’re facing an opponent like Luke Skywalker and he can anticipate your landings, then you might find yourself in a sticky situation, up close and personal. However, once you’re up in the air again you will be able to continue taking shots and dodging them as well. After a little bit of practice time with Boba Fett, the flow of shooting at your enemies while flying will become easier.

“One of the things I enjoy watching is seeing people chain attacks together and using the systems to their best. Managing cooldowns is part of it, too. We’ve seen players coming up with tactics that we haven’t thought about, and that is truly awesome,” says Jamie Keen.

You will be able to try out Boba Fett for yourself when Star Wars: Battlefront is released on November 17th.