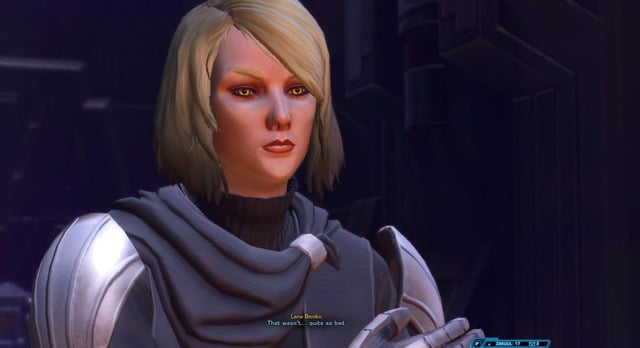 Charles Boyd, Creative director for Star Wars: The old republic, just announced a fix for the marriage with Lana Beniko.

I wanted to share a more detailed update about the Lana marriage bug that cropped up with Update 5.9, and how we’ll be addressing it with Update 5.9.2.

When the dev team originally implemented the variable that stores whether a given player character has chosen to marry Lana or not, a bizarre quirk of the tools caused that variable to not be set permanently, even though we told the tools to do so. As I’m sure you can imagine, we found this quite frustrating, and have thus destroyed said “quirk” via ruthless orbital bombardment to ensure that this doesn’t happen again. From now on, characters that are in a romance with Lana who play through the Solo Story mode of the Nathema Conspiracy Flashpoint will have their decision of whether or not to ask Lana to marry them remembered permanently, as it always should have been.

Of course, this still remains an issue for those players whose characters are in a romance with Lana and have already completed the Solo Story mode of Nathema Conspiracy. We have implemented a solution to correct the issue for those players in Update 5.9.2. When the servers come back up with the new update, a brief new mission will appear automatically on all characters who meet the following criteria:

The new mission, “An Error in Alliance Records”, will send you to the droid H1-R1 on Odessen, who will ask you a series of questions to correct some issues in his corrupted Alliance personnel files.

Please be sure to answer his question about your relationship with Lana honestly, as it’s going to be remembered permanently this time.

You may wonder if it’s possible to tell the droid that you didn’t agree to marry Lana when you actually did, or vice versa. The answer is yes, that is possible; this is your one chance to change your mind consequence-free, but be sure that’s what you really want to do – as I said, your answer will be permanently recorded.

We wholeheartedly apologize to all players impacted by this issue, and appreciate your patience as we put together our solution.