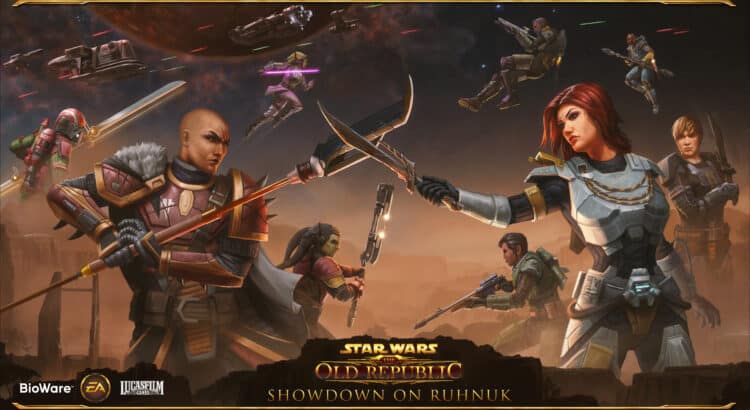 The highly anticipated game update 7.2 “Showdown on Ruhnuk” is now live for players of the popular MMORPG Star Wars: The Old Republic. This update brings a host of new content, features, and improvements to the game, including a new Flashpoint and Galactic Legend encounter, as well as a host of quality of life improvements.

One of the most exciting additions to the game is the new Flashpoint, “Showdown on Ruhnuk”. This challenging new mission takes players to the planet Ruhnuk, where they must fight their way through waves of enemies to reach the final boss and claim victory. The Flashpoint is designed to be challenging and rewarding, offering players the opportunity to test their skills and earn valuable rewards.

The update also introduces a new Galactic Legend encounter, “The Battle of Rishi”. In this epic showdown, players must lead their forces into battle against the fearsome Rishi pirates, who have taken over the planet and are threatening to disrupt the balance of power in the galaxy. The encounter is designed to be highly replayable, allowing players to experiment with different strategies and tactics to claim victory.

In addition to these new content additions, update 7.2 also brings a host of quality of life improvements to the game. These include the ability to earn rewards by completing certain activities, such as completing a daily or weekly mission, and the ability to transfer unlocks between characters on the same account. These improvements are designed to make the game more enjoyable and accessible for players of all skill levels.

Overall, game update 7.2 “Showdown on Ruhnuk” is a welcome addition to Star Wars: The Old Republic. With its exciting new content and improvements, it is sure to keep players engaged and entertained for hours on end. Whether you’re a veteran player or new to the game, there is plenty to enjoy and explore in this latest update. So don’t delay, log in today and start your adventure in the world of Star Wars: The Old Republic. Read more about it over at the official website.